Can I keep an adult and a sub-adult axolotl together safely?

Lavender is about 3 years old, and clocks in around 10.5-11" last time I checked. Here's a handful of pictures so you get an idea of what a chonk she is: 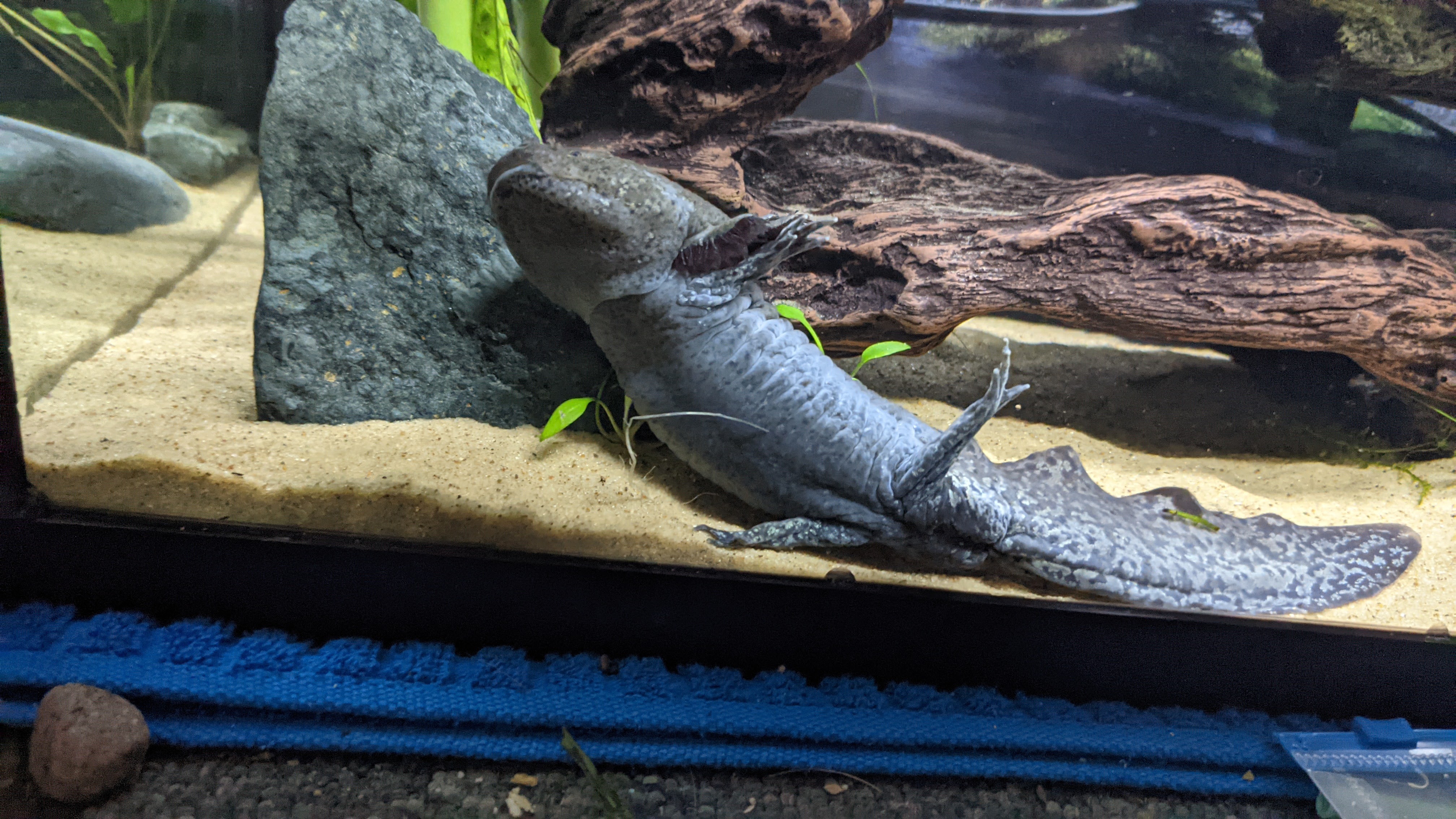 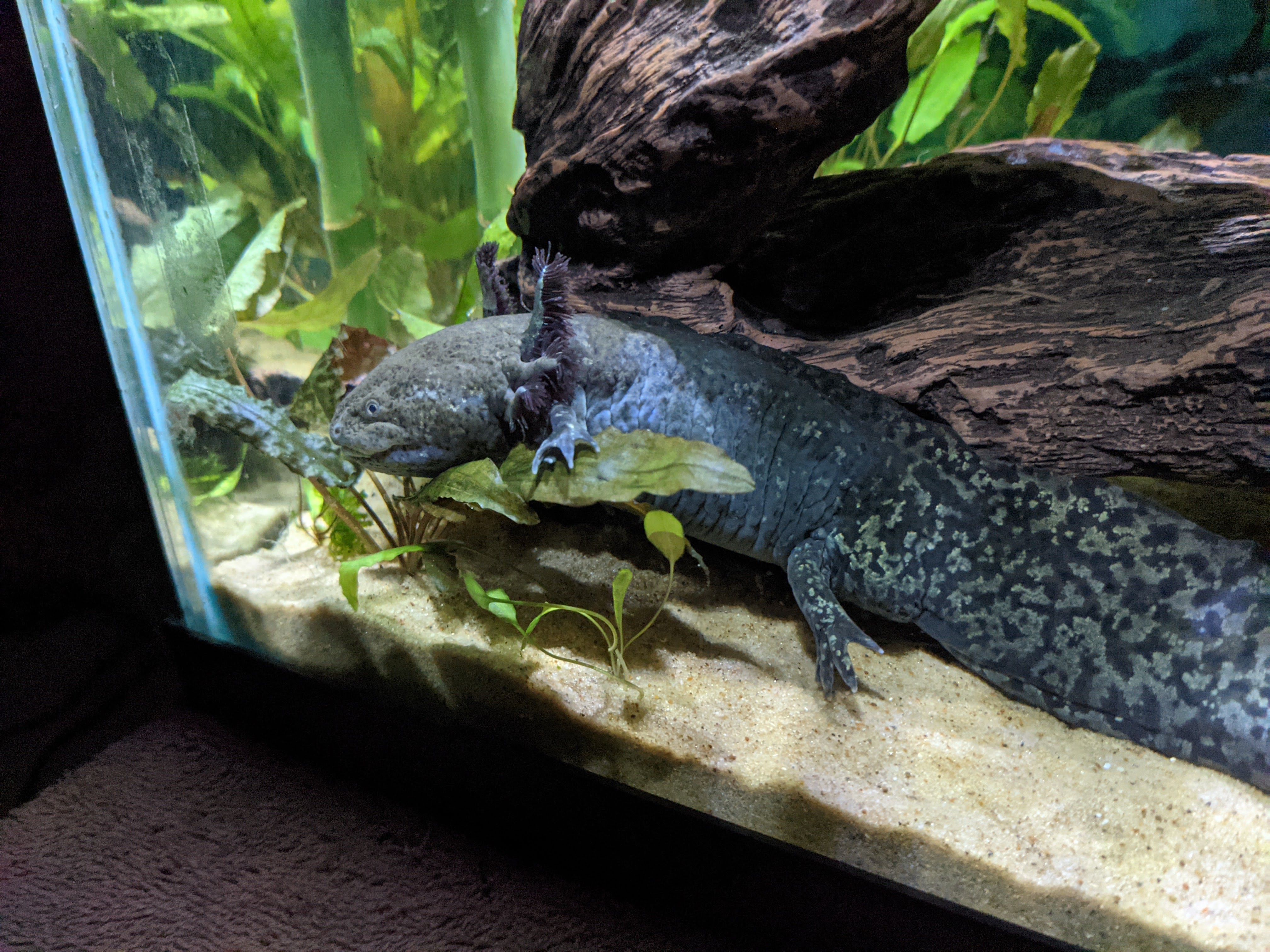 Lavender is very chilled out, especially as an adult. But she has never been particularly rowdy. (Also not completely sure she is a she).
Unfortunately she is a little bit traumatized after I went camping for 2 weeks, but that's another story. She's physically doing better, but is still coming out of her shell again with me. 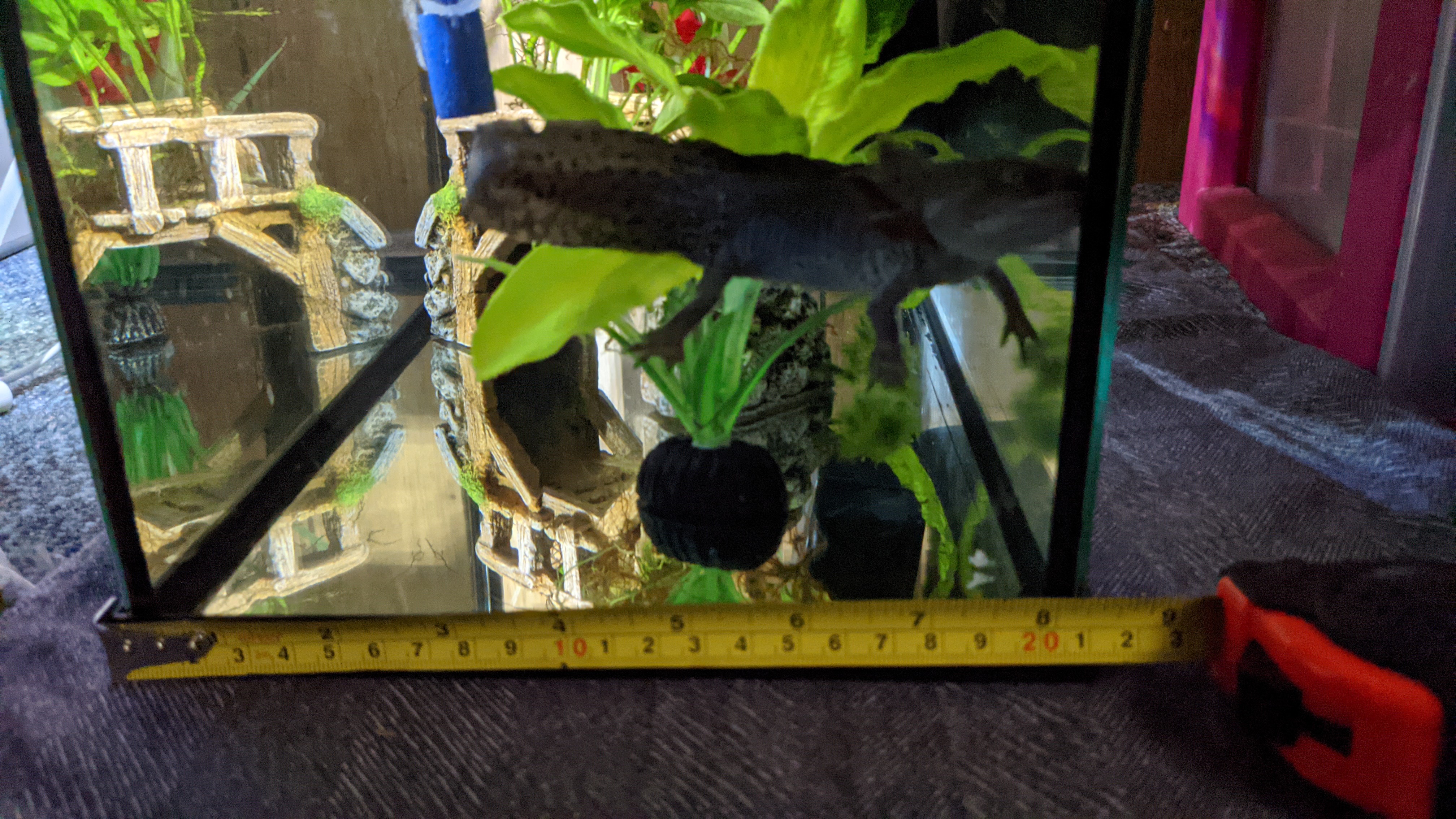 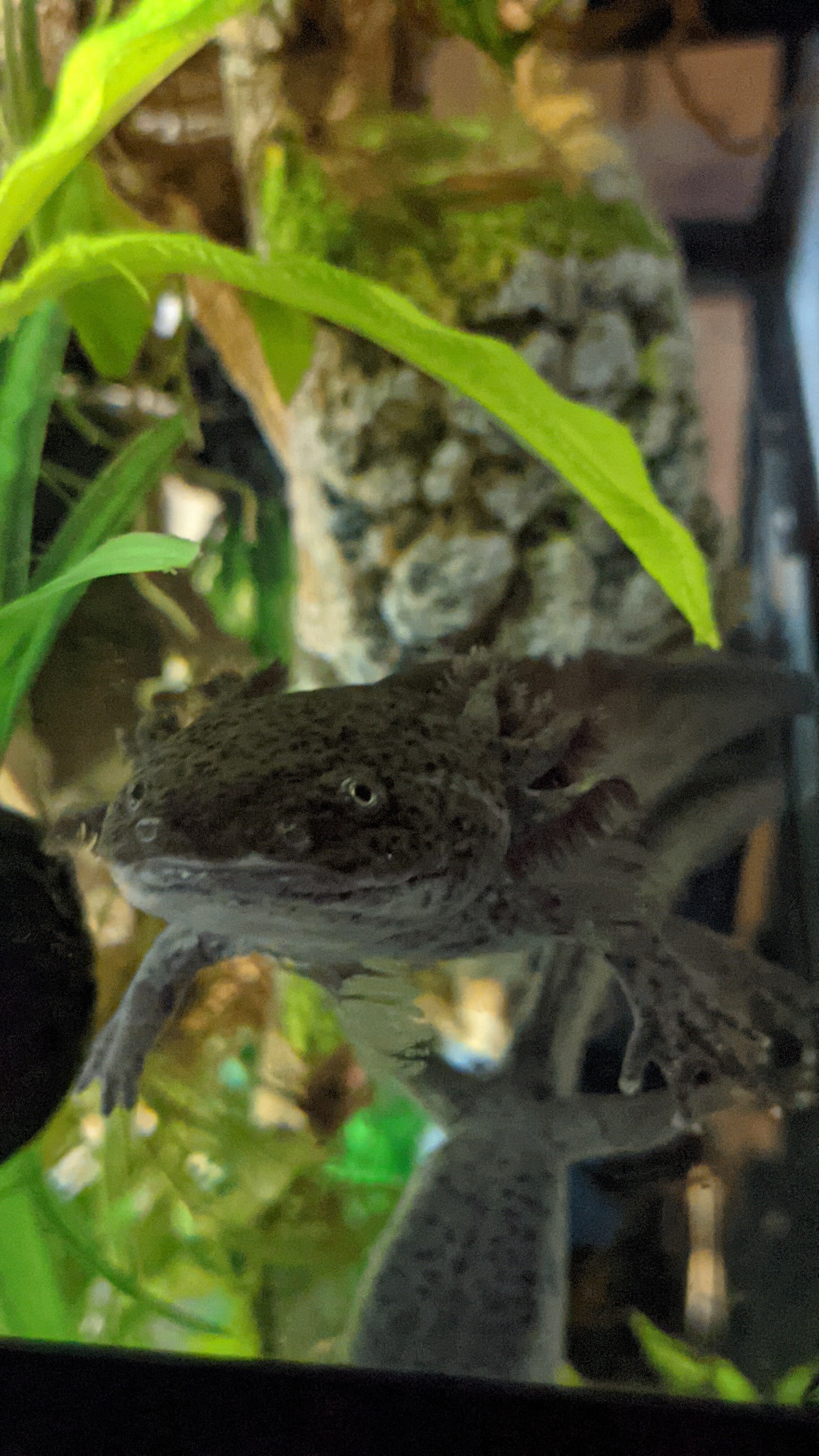 As you can see, although he is only 3" shorter, lavender is probably double his size.

I don't think she would be able to eat him, also not sure if she would even want to. She doesn't tend to seek out food, she prefers it to wave right in her face (preferably hand fed, what a diva).

My issue right now is the 5 gallon tank I put Arthur in temporarily when I rescued him is quickly becoming cramped. It was fine when he was still putting on weight and getting his strength back, but he's starting to look a little stressed in there.

At what point would I be okay to add him to Lavender's tank? It's a 3ft long 30 gallon with an aquaclear75 and big sponge filter, btw, this is it: 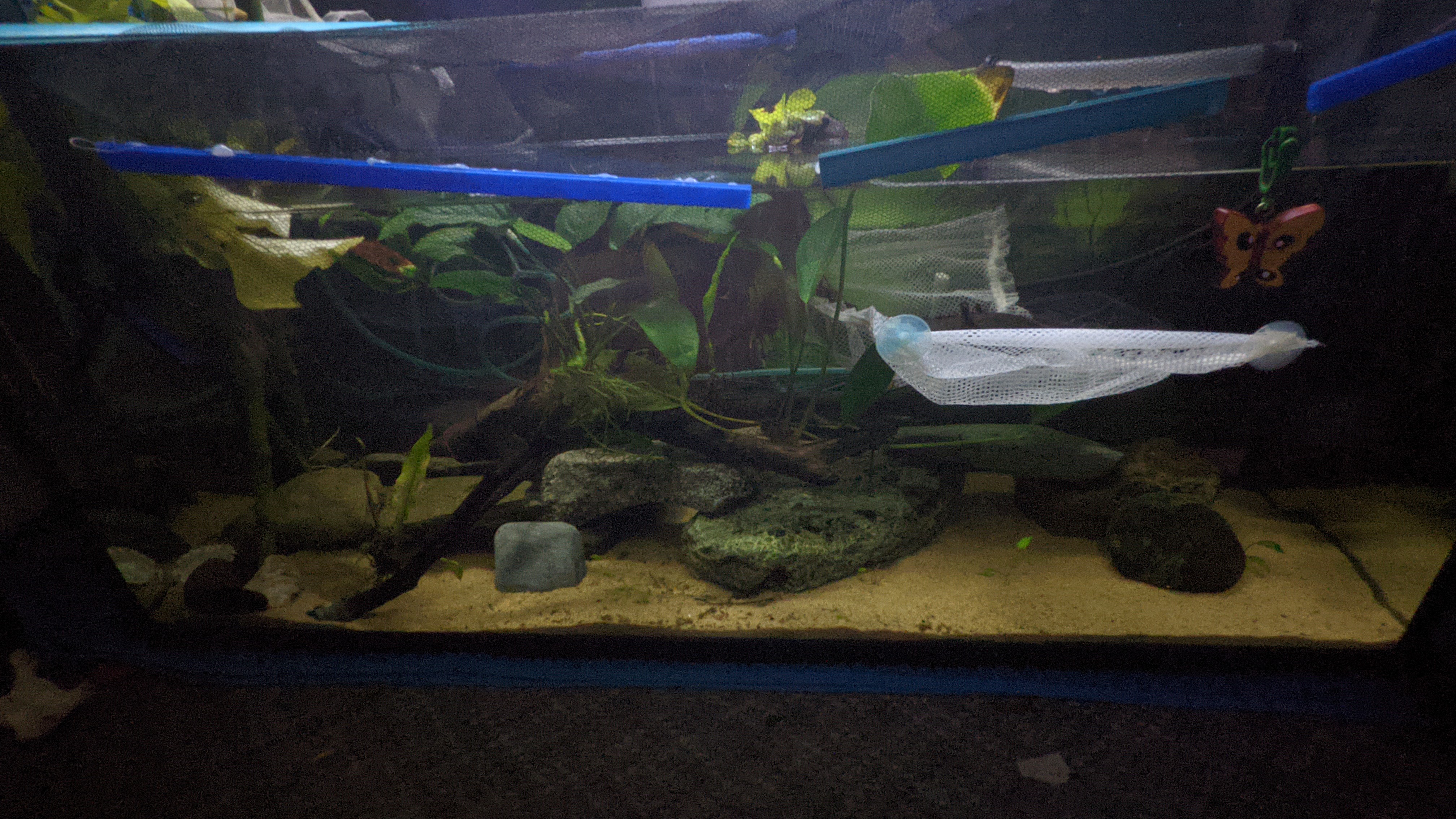 She loves her hammock btw, highly recommend one for your axi
F

Oh and I meant to say, Arthur is super active and constantly starving, or at least acts like he is. Maybe because he's so little still, but he's always on the move looking for food. Not sure if that could end up being an issue for Lavender, but I think lavender would like some company. She gets lonely

You and me both! Lavender is starting to come back out of her shell so I'd love to try to introduce Arthur, just waiting on an expert's opinion on when

With a length difference of 4", I think it's really risky for Arthur, especially if Lavender is used to be alone. She is nearly 4 times heavier than him !
(the only things she sees moving around are preys I suppose).
Moreover, axolotls are not social animals and can live alone without any problem.

With the time, Arthur will probably grow to near the same length as Lavender. Please be patient
F

JM29 said:
With a length difference of 4", I think it's really risky for Arthur, especially if Lavender is used to be alone. She is nearly 4 times heavier than him !
(the only things she sees moving around are preys I suppose).
Moreover, axolotls are not social animals and can live alone without any problem.

With the time, Arthur will probably grow to near the same length as Lavender. Please be patient
Click to expand...

Is it common for axolotls to grow to that size? I see some posts on here where they seem to top out not much larger than Arthur.

Also, can you sex lavender based on the first pic?

So when I first got my axolotl, a friend actually held on to him for a little bit while my tank cycled. She put him into one of her tanks with a fully grown, very friendly axolotl, and my always-hungry idiot boi took a biiiiiig chomp out of the other's tail. At the time, he was 5" and she was 10," literally TWICE his size. Now he's over 12 inches long and quite chonky because he's so well-fed but I still have no plans of putting him with another axolotl because he basically thinks anything that moves (including his own reflection once or twice) is food, lol

Its not advisable to mix axolotl with such a size difference, they may be fine but you wont know if its a problem until the smaller one is missing or missing bits. Axolotl are canabalistic and smaller axolotl can suffer from stress in the prescence of larger ones.
You must log in or register to reply here.
Share:
Facebook Twitter Reddit Pinterest Tumblr WhatsApp Email Share Link
General chit-chat
Help Users Options