I want to start by getting a quick question out of the way. What's the best way to transport a tiger salamander to the vet? I've never had any health issues with my salamander before, so I'm completely green when it comes to treating anything. I immediately got a vet appointment today at a local exotic vet and have an appointment in a few hours.

Now for the issue. Any advice is appreciated!

I have had an Eastern Tiger Salamander for roughly 9 years.. Suddenly she's refusing to eat even though she's losing a lot of weight. She seems a bit lethargic as well, but not so much that she isn't digging. She ate once last week, and then buried herself as she does and I hadn't seen her since. Today, when I found her she was a lot thinner than I've ever seen her. She was moving around a little, and got into her water dish for about 10 minutes before I started getting concerned that she seemed a little lethargic. She put her head under water and blew bubbles twice so, not wanting her to drown herself, I reduced the water to a level she wouldn't be able to submerge her nostrils and moved her back out of the water dish.

She's also doing something I've never seen her do before where she has her back legs spread and is pushing her rear side to side. She will do that for roughly 10 seconds and then moves her stomach in a strange wiggle that reminds me of a snake slithering. It all looks like some sort of weird dance.

She has since covered herself in substrate, but isn't burrowing under her usual hide. Though this isn't all that strange either, she sometimes just hangs out barely covered and stares into the room.

I haven't given her a full examination yet because I plan to clean her off and do that right before taking her to the Vet, and don't want to have to put her through the stress twice today (she hates water being put directly on her).

In the past she sometimes refused to eat, especially when the seasons are changing, and sometimes won't come out from being buried for weeks at a time. Usually it's not an issue, and after 2 weeks I will dig her up and she'd be plenty active and would feed right away. Sometimes she'll do that for a month or two and loose weight, but usually she'll start to come out again and plump right back up.

She's in a 20 gal tank, with roughly 3 inches of coconut fiber and about an inch of topsoil at the bottom. There are several hides, but no vegetation or other animals/insects. Temperature stays between 65-70 at all times.

I can't tell you what's going on with her, but as for getting her to the vets the best way is a small tub or critter keeper with plenty of wet kitchen roll or similar. If you use a see through container it's best to keep it covered while you travel to minimise stressing her on the way.
D

Update:
I took her to the vet and they did an xray, thinking it might be arthritis or calcium deficiency causing a bone disorder. They said her bones looked great, but it looked like she had trapped gas and asked if anything could have fallen on her or if she had experienced any trauma. Nothing in her setup is able to fall over, and she stays under her water dish 99% of the time and it's not heavy even when full.

They told me to keep her warmer than I usually do (~67 F), so I've been trying to keep the substrate surface around 71-72 F and the air around 73-74. I'm hesitant to go much warmer than this since I can't be there all day to make sure it doesn't get too warm.

They also gave me antibiotics to put on her twice per day and said to bring her back in a week.

5 days later and she hasn't started eating yet.

Her stomach stopped doing the strange ripple, and I haven't seen her do the strange motion with her legs again, but now she's periodically making small movements like she's having a hiccup.

She's moving herself to face in different directions and moving small amounts of dirt around between times I check on her. However, when I do check on her she tends to just stare into space and not react to me or food, or will eventually turn her head away. She's also not burying herself like she usually does, and just stays under the water dish.

I'm not sure if it's just me but she also seems like she's not as skinny looking now as she was a few days ago, but I didn't think to take pictures before, so it's hard to know if I'm just getting used to her size. Going to take daily pictures now to make sure she's not bloating.

I'm attaching 2 pictures of her. They're probably not very useful, but she didn't have any strange marks or discoloration last week, and I'm hesitant to handle her or rinse her off more than necessary right now to avoid unnecessary stress. 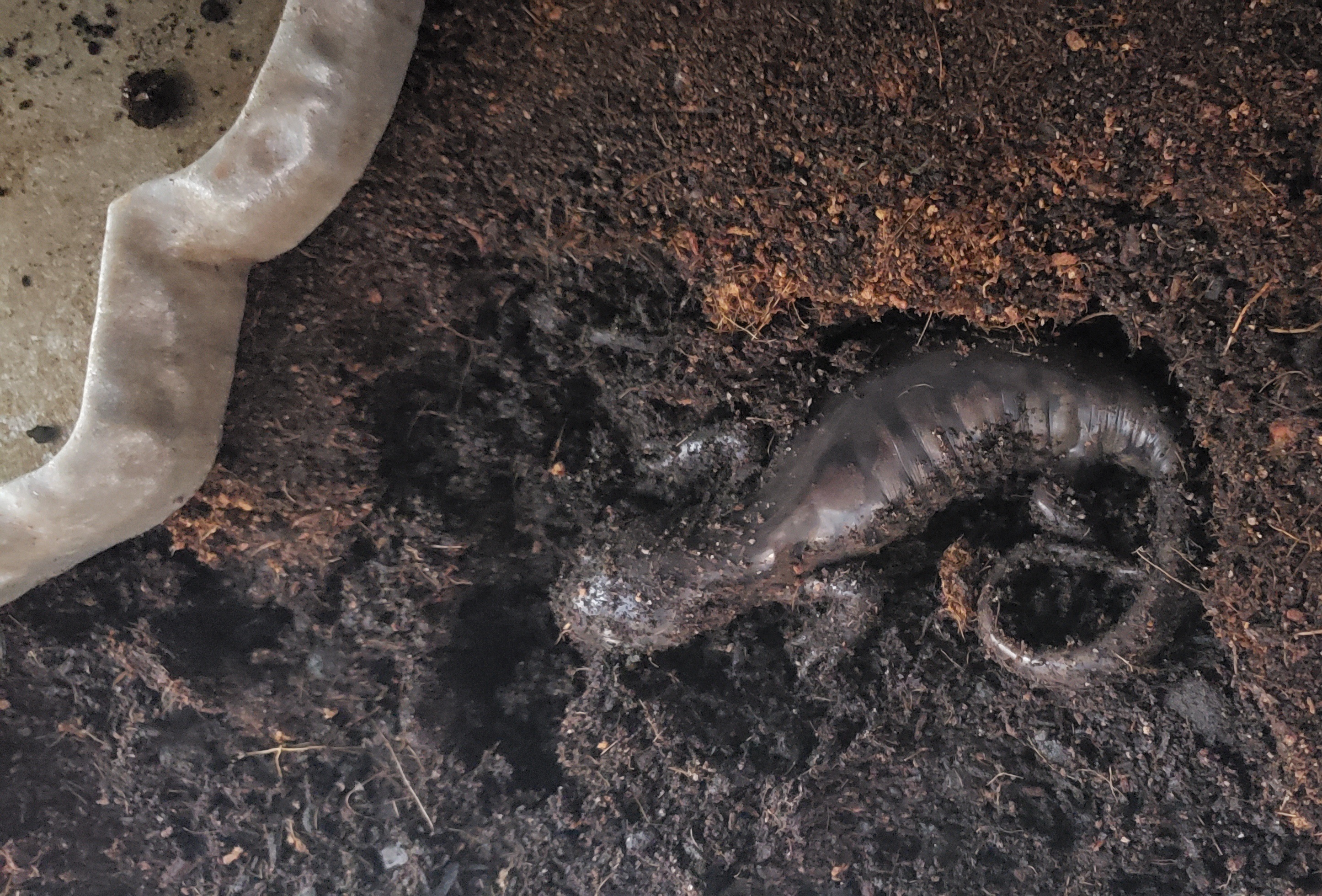 Good news! I went to offer her food again and she was peeking out from under her water dish. She immediately perked up and ran out to eat. It's the first time she's showed any interest in 5 1/2 days! She was so excited she started trying to climb the glass (a big improvement from barely responding to being touched). I'm including a picture of her eating!

I immediately shot an email off to the vet, who advised to continue the antibiotics until we're 100% sure she's acting like herself again. She also asked me to try to acquire a stool sample to test for parasites. She seems to usually poop underground though, so if she returns to burying herself like she normally would I might have to do some digging!

So glad to hear she's improving! There's no way to describe that first time they feed after a period of illness and fasting is there!
Please keep us updated, it will be helpful to others to know what was wrong I'm sure.
D

Chinadog said:
..There's no way to describe that first time they feed after a period of illness and fasting is there!
Please keep us updated..
Click to expand...

It's true. I was ecstatic. After being lethargic for a week, her snapping at the worm was a huge stress relief whether she was going to eat it or not.

I will definitely post any updates I have. Still waiting on a stool to send off to the vet.
R

Thanks for sharing the symptoms and the good outcome. Sadly our little one didn't make it. The story sounded very similar to yours, lack of appetite, wiggling vigorously not moulting, standing up on all four legs, turning her head away from food, etc. I wish I had checked this board sooner. She was trying to tell us something was wrong and we didn't hear her. :-(
You must log in or register to reply here.
Share:
Facebook Twitter Reddit Pinterest Tumblr WhatsApp Email Link
General chit-chat
Help Users Options
Naxuzi: Hey guys I was wondering if my axolotl looks fine to you he/she (still don’t know) I’d activate... +2 Wednesday at 1:11 PM
Chat 0
Top