Status
Not open for further replies.

They're at it again. This time it will pass unless US hobbyists start writing letters to their senators and send money to our own lobbying groups like USARK.

Everyone needs to be vocal about this and contact members of the committee and their senators. Even without knowing the language this will more than likely be a death blow. If it makes it out of committee I fear the fight to stop it will be near impossible. People need to realize this won't be a court case so engaging your senators is a must.

Here is the bill in Govtrack 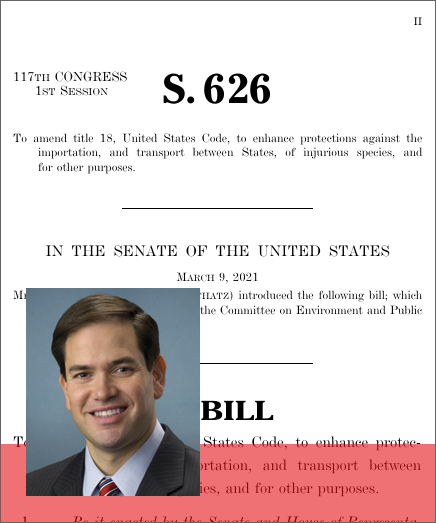 A bill to amend title 18, United States Code, to enhance protections against the importation, and transport between States, of injurious species, and for other purposes.

From what I can tell, the full text isn't yet available, but it will be on this page when it is

I received this opinion from an acquaintance who has more expertise than I do. This person cannot post themself due to their job/profession.

I suspect because Marco Rubio is sponsoring it that 1) a draft may already have some bipartisan support, and 2) it probably is rolling immediately off the state python phase-out/ban just implemented by Florida about 10-14 days ago.

In this case, because it is Congress/the Senate, this is much more likely (than was the emergency/admin rule of 2016 that took place in an agency vacuum) to be affected by a number of good, reasoned (=not rants) letters WITH SUGGESTED ALTERNATIVES (like BSal testing) from constituents to the committee members. In addition to a letter perhaps signed by the admins of Caudata (mentioning total US membership if that kind of data can be harvested) a letter writing and phone call campaign from individuals to their respective Senators at the current stage (bill in committee) can make some difference. Congressional staff do count response, but again no matter how frustrated, folks should try to avoid rants, saying "just don't do this," and then suggest reasonable alternatives. People need to act fast though because once it gets out of committee it will be harder to get changes.

Though USARK I'm sure will be heard, they are going to be representing the python breeders more than anything. People need to engage politically if they want any hope of getting reasonable change made before it gets out of committee.
Click to expand...

Do we have a list of talking points / alternatives we can suggest in our letters? Looking for something more than 'I want to keep salamanders because they are neat'.

I hope others are writing talking points right now, as I am. I will post something in the next 48 hours. I think it's important to mail letters and to send electronic copies to the senators concerned, and this needs to take place immediately, while the bill is in committee. You will need to select, personalize, and ideally compose your own talking points that best suit your individual argument.

Frankly, the hobbyist comments on the national register in March 2016 were few and mostly pathetic, brief and lacking in thought. That all has to change when you're writing letters to senators.

Have you come up with any points though? I am off tomorrow and will do my letters tomorrow. I had a list last time and posted about it here. I wonder where that post is...

Update: I will be posting a lot of info tonight. Please bear with me. This is a distinctly different process and approach than 2016.

I have created a sub-forum for further discussion of this issue at the following link. Please direct further questions and discussion to that sub-forum.

For all information and discussion of the bill to provide USFWS with powers to ban interstate transport of salamanders and other animals at their discretion.

Status
Not open for further replies.