A. andersoni with a black belly.

It goes well with the andersoni in first stay. A week ago they switched to different food. The Daphnia probably caused health problems. It was also time, now there is no Daphnia in the ditch. Thousands of small fish, together with the warmer weather, put an end to the food.
It is amazing how quickly they are accustomed to other foods.
The young andersoni eat more per day than the 7 adult animals in one week. The andersoni that have been moved to the garage have been lost. A small number of these are still alive. Next week there has to be divided again.

A small summary of what has occurred.
16 of the approximately 130 animals in the garage are still alive. A bacterial infection has caused a slaughter on the animals. At first it appeared that it was a fungus. Treatment with salt, however, did not provide any improvement. I also added extra salt to the water tanks to reduce the problem. This had the disadvantage that filtering became worse and the contamination became larger. The contamination stopped when I added Furan to the water. This may have worked, but I am not sure of it. The water tanks in the house also had problems with this bacteria, but much less. Here it has stopped by itself. This contamination halved the number of animals. It is possible that these bacteria eat the meat, after which fungi occur. The animal on the photo has eaten well 8 hours before this picture is taken. (Disease description: starting as white dots on the finger points, then it quickly falls over to the legs and then it comes onto the body).
The chance of infection from animal to animal is probably not high. Because in the beginning I thought it was a fungal infection, I fed all salamanders with affected feet to my Axolotls. The Axolotls did not experience any adverse effects. I consciously did not feed the animal in the picture to the Axolotls, so I could wait for the result and take a picture.

Re: A. andersoni with a black belly.


RG said:
It goes well with the andersoni in first stay. A week ago they switched to different food. The Daphnia probably caused health problems. It was also time, now there is no Daphnia in the ditch. Thousands of small fish, together with the warmer weather, put an end to the food.
It is amazing how quickly they are accustomed to other foods.
The young andersoni eat more per day than the 7 adult animals in one week. The andersoni that have been moved to the garage have been lost. A small number of these are still alive. Next week there has to be divided again.
Click to expand...

What beautiful animals!
Sorry you lost some due to fungus.
Hopefully you will have more survivors than casualties.
Thank you for sharing your journey.

They survived almost everything.

It's been a while since my last post.
A lot has happened to the animals. The (40) young andersoni who were kept in a ditch outside in a mesh container. Have shown themselves as good survivors. Daytime water temperatures of thirty degrees Celsius were no exception in this extremely hot summer. And the water was contaminated with blue algae for a few weeks. The (20) andersoni living in the house also survive this difficult time. The animals 12-13cm had to leave because it became impossible to provide enough food. Made an appointment with a reptile and amphibian shop to offer all animals at a large reptile fair. An extra table was arranged especially for my animals. A few days before this fair, I received a call saying that there is new European legislation regarding the trading of newts. it was now forbidden to trade salamanders within Europe. Everything changed now, and the inevitable happened in the following month. Animals deteriorated visibly, 6 andersoni selected and placed in the box in the house, the other animals went outside. finally the animals in the house survived 2 male 4 female. A male has been put in the aquarium. This is because a man died after I fed him a guppy. This was the first time a guppy was fed and also the last time, don't know what went wrong. Vacation 08-2019 been a month to indonesia. My pump starts to leak 4 weeks before departure. Ordered and installed a new 900 l / h pump, the next morning the water was not crystal clear. The water slowly began to whiten. Bacterial growth in the new pump I thought this would normalize soon. But it went differently than I expected. On the day of departure for Indonesia, the water was still not crystal clear. Everything transferred to the new caretaker and left. In all good intentions the caregiver decided after a few days to do a water change. So this had the opposite effect. When I returned the water was still not 100% and I found a dead animal floating. Two animals had eye damage, one of them on both eyes. This was bad luck if the old pump had not leaked, probably nothing bad had happened. it took more than a month before everything was crystal clear again. 03-2020 It seems that the blind animal has started to see a bit again, the white pupils are a bit more dark again. The deceased female has been replaced by a young female of her own.

They survived almost everything (images).

It's time for an update again. After my holiday last year, there have always been problems with the water quality. I thought I would have solved it when the water cleared up again. But every time after feeding the quality went down considerably. This happened after one to two days after feeding. It seemed that the water was getting better fairly quickly during the day. But after the night the water had deteriorated again. This went on for several days until it stabilized. But this did not last long of course there have to be fed again and it started all over again. Problems were exacerbated by the growth of large amounts of brown brush algae. In the fight against this plague I used Carbo. To spread this properly through the tank, I hung a 300 l / h circulation pump in it, with the outlet just below the water surface. The next thing I noticed was that the filter performance improved a lot at night and the pollution problem was solved immediately. Andersoni produce more pollution when they have eaten. They produce faces, spit out the food, occasionally rinsing their stomachs which create a significant white cloud in the water. Despite the fact that the circulation pump has no filtering work, much has changed.

I think that water plants consume too much oxygen in my tank at night. The vegetation was very dense with many Java ferns. Given the large number of residents, the filter could no longer process it at night due to lack of oxygen. I have now added my older pump 800 l / h, O-rings inside the coupling system have been replaced and it is no longer leaking. In theory 1600 l / h is now pumped through the tank.

Last summer a female from the captive bred died. At one point she was pushed to the surface. Gas formation in the intestines. I immediately put her in the fridge. She has been in this for more than a week, in a kind of coma due to the low temperature. It failed to stop the bacteria. The remaining male is now in the aquarium that makes eight. Last week I saw some semen packages on the bottom. This gives some hope for captive breeding. 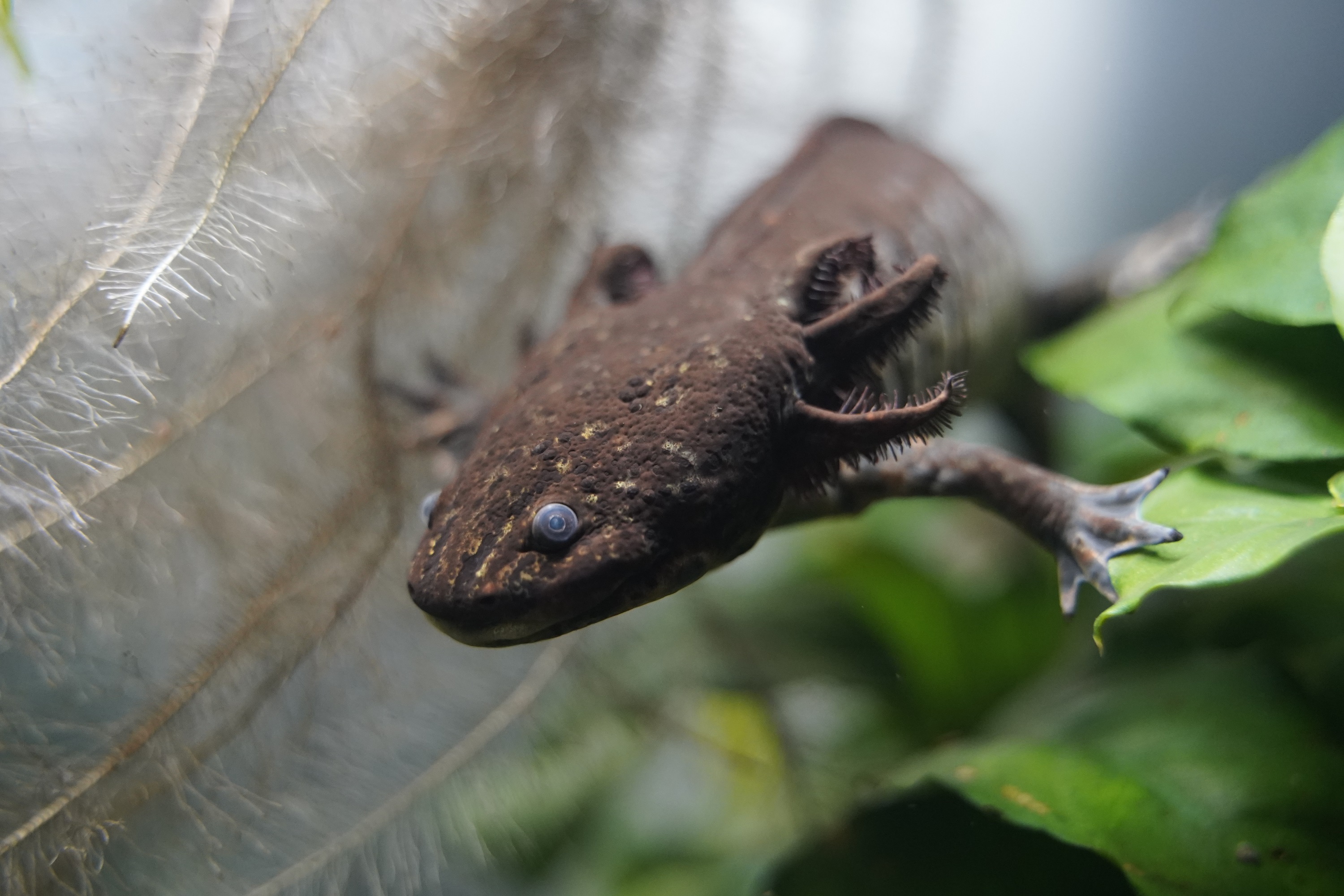 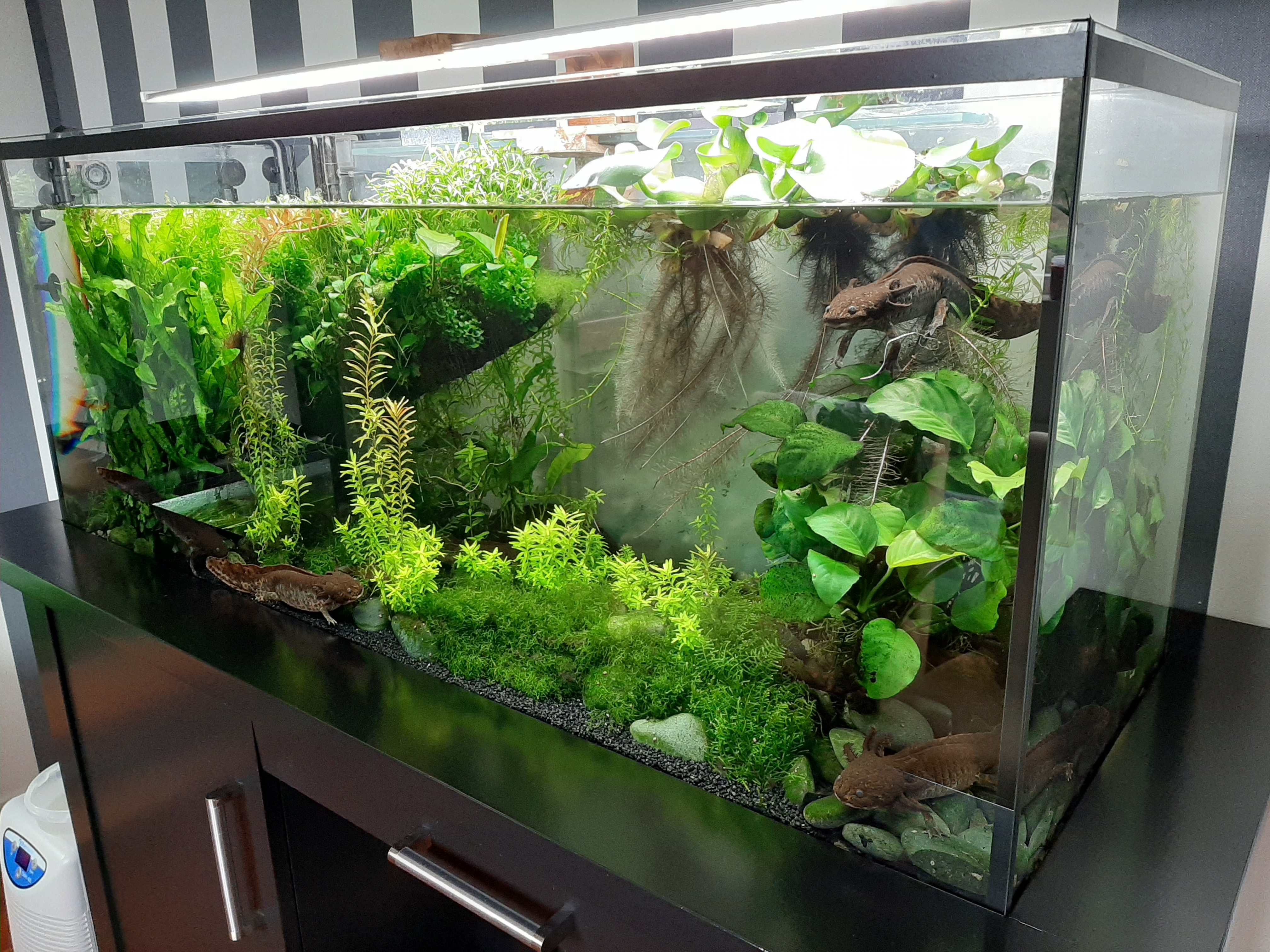 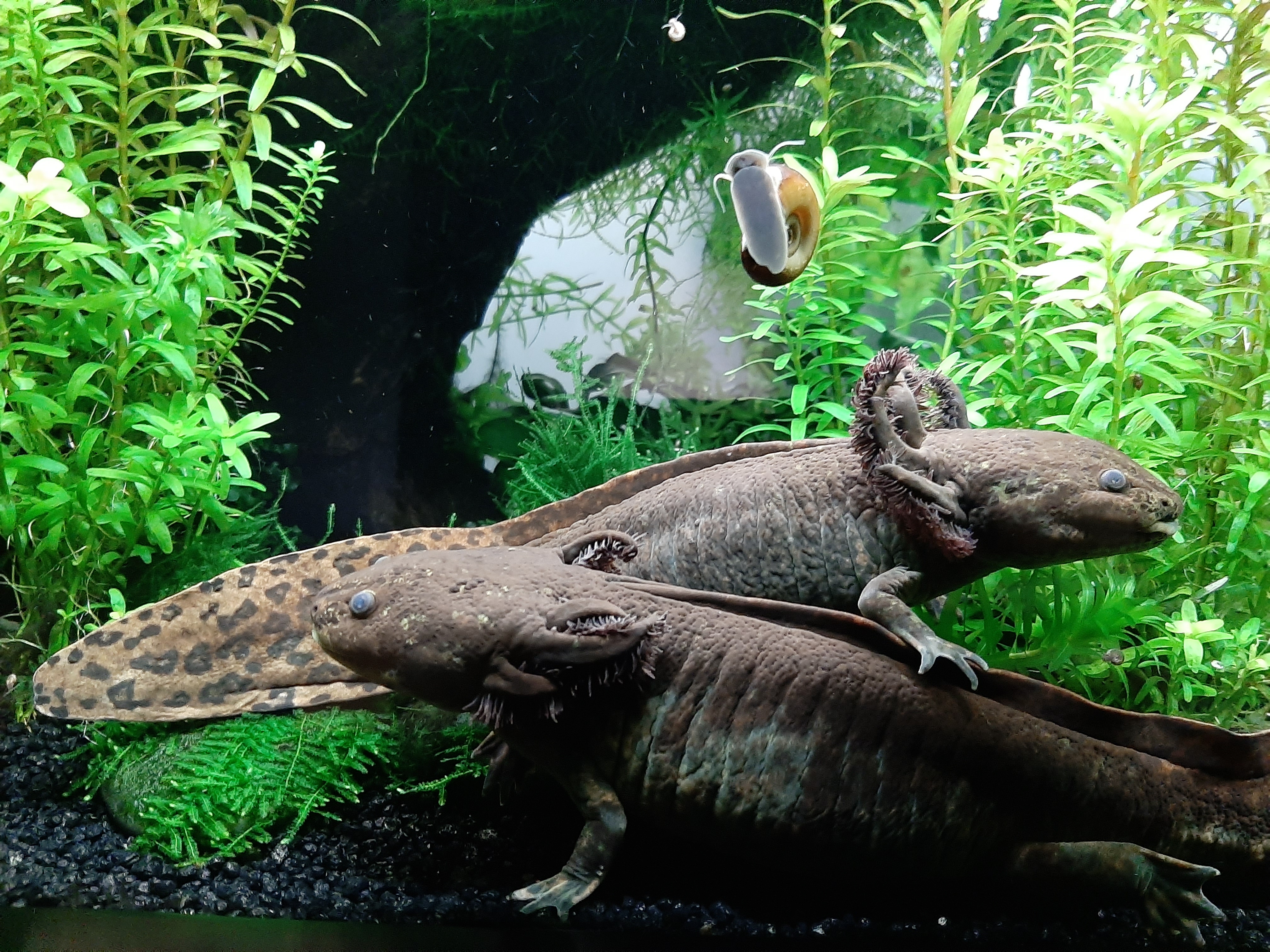 Update extra pump.
The aquarium is doing extremely well. Water quality appears to be good and remains crystal clear all the time. The Andersoni are also looking better. They are now eating more and have also become more active. Now after a year the aquarium is back to the quality level of a year ago.