My nephew caught two red spotted efts at the farm, he refused to leave them in the wild so home they came. He’s also only 8 and the idea of having a newt sounds better in theory then in reality. Moral of the story I ended up caring for them, I bought a tank, set it up, bout food, drops for the water, strips to test everything etc and have been watching over them for over a year now. Sadly the first one he caught died about a week ago. It was becoming lethargic and completely unlike its usual self. I did the quarantine thing. Replaced all the set up in the tank, It had a mold? Growth on its “armpit”. I cleaned w a qtip and suuuuuper diluted hydrogen peroxide, (which I read was safe ) put her In a bath of her reg treated water . It’s surprising how hard it is to find information on them very glad to have found this page. Eitherway “lizzy” molted In her bath and I returned her to the tank w the other and kept an eye on her until she was done and removed her skin so she couldn’t eat it ( wasn’t 100 percent on how safe w the peroxide it would be). Put extra food with dusty vitamins on and let her be. checked on he later and she seemed better. Two days later I went to feed them as i do at night, I uncover them so they kno and can see and couldn’t find her (the other has always been skittish) she seemed to understand it ment time to eat the other would run and hide again and come out on its own terms. I could her under the most shriveled up and dried out like a stick! I cried. I cldnt say goodbye and didn’t kno what to do so she stayed ina container for quite some time w a wet paper towel. She never came back. My question now is this. The other was fine up until 3 days ago. I’ve searched high and low for any info. Three days ago the other newt stopped actively moving. It burrowed in moss and doesn’t respond to touch so much. It’s tail moves and it’s arm moves when I touch it. And it isn’t dried up like lizzy was. Anyone that can tell me anythin about what is happening. Would be greatly appreciated, Is he dead? Dying? Hibernating? Sick? I tried to help lizzy and I think I did more harm then good. I’m terrified to even try anything and I have no idea what or if it is even still alive. Help!

To help, we need some info from you- what temperatures is this newt exposed to, and what has its diet consisted of? When you say you have moss, what type of moss? Can you post a picture of the habitat and the newt?
P

I’m not sure the temp of the actual environment. The moss is moss collected from the same area the newts were caught. I live in Erie. It’s winter now and it’s cold outside but it is in a 10 gallon tank in the living room. theres a screened vent and springtails to help w upkeep, and also a light that we use to mimic natural light on Gloomy days or at nite when it’s time to eat. A side sits by a window and we open the curtains duri the day. Yes! I would gladly take pics of everything if u could tell me how to do that on here. A varied diet the best I could, they liked the flightless fruit flies, I bought amphibian vitamin powder and calcium that they get dusted in, they’ve eaten meal worms. Chopped earthworms. I tried canned snails they didn’t seem interested and pellets. Which not a chance. Freeze dried bloodworms, dried black worms. They won’t touch anything. That doesn’t move. They’ve eaten a couple of crickets when I could find small enough ones to give them. I tried brine shrimp, with little success
P

I haven’t heard any follow up. He is still in the same shape. Anyone that has any suggestions please let me know!
C

Too dry. I found that high humidity help elf. Lots of moss. Mist twice daily then gradually decrease it until its appropriate.

Enclosure is too big for elf. In my personal experience, the smaller the enclosure the better it is for the elf. I found 6 quart shoe box to be extremely effective, especially for noto.

Ignore the scorpion, it's the same setup I use for my elf. 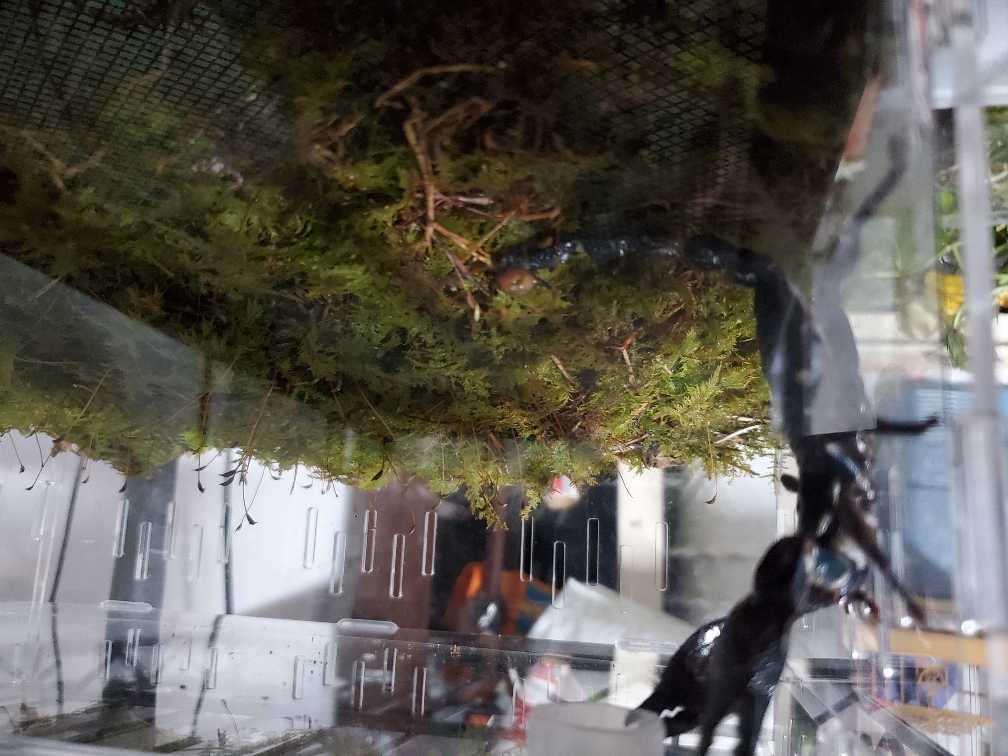 Sent from my SM-G975U1 using Tapatalk

In addition to the previous comment, I also wonder about the soil- it almost looked to me as though it has fertilizer additives (those white looking specks) Do you remember if you used organic potting soil? Also, learn what temperatures that tank is exposed to and if needs be, move it to a location no warmer than around 65F. Best of luck!
G

Parisc said:
I haven’t heard any follow up. He is still in the same shape. Anyone that has any suggestions please let me know!
Click to expand...

Aw, just now seeing this. I've not been on caudata for ages. Hope the newt survived.
You must log in or register to reply here.
Share:
Facebook Twitter Reddit Pinterest Tumblr WhatsApp Email Link
General chit-chat
Help Users Options
Mark.H: Ok, thanks! I am going to glue together the shale I mentioned. +1 Today at 6:38 PM
Chat 0
Top