As some of you will already know I have been keeping shanjing. The species really fascinates me and has influenced most of my assignments this year. I really think there a truly great salamander.
I currently have three juveniles from two different lines with very interesting personalities. My family have a Disney/ Pixar influence at naming animals so we have mumble, pascal and hiccup. Hiccup is by far the biggest, Pascal is the boldest and feeds off tweezers and Mumble the brightest out of the three and very active.
They feed on variety of different foods woodlice, crickets, earthworm, whiteworm, bloodworm, and chopped up earthworm.
In their enclosure they have a peat free mixture of substrate, with cork, live moss, artificial plants, terracotta pieces and a water bowl.
Feed daily and sprayed twice a day. I was surprised how aquatic mumble can be in his bowl.

So I introduce to you my shanjing. 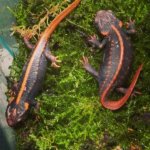 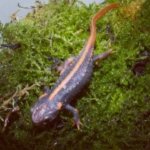 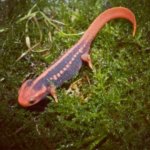 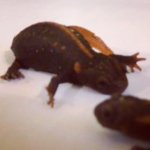 where do you get ur pete free soil from? and how much it cost mate

Local 99p store has some but not best quality but b&q had bags on offer for a pound so bought a few bags. 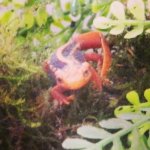 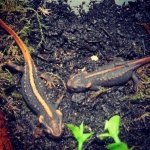 View top chatters
Open in popup
jnerdx: Super rare but I was looking for an Iranian Kaiser newt. If anyone has any info please send me a PM +1 Thursday at 7:39 PM
Chat 0
Top