My young Notophthalmus are growing up...

hahahahahaha he's turning out to be quite the stud!!! don't you wish we could have stud contracts etc for breeding these guys?

ferret_corner said:
hahahahahaha he's turning out to be quite the stud!!! don't you wish we could have stud contracts etc for breeding these guys?

Yeah I feel like a little bit of pervert trying to find a girlfriend for my newt!

lol oh the images in my mind, you naughty naughty thing you!!
A

Lol, sneaky is a a teenager!

antcatcher11 said:
Lol, sneaky is a a teenager!
Click to expand...

Yep. He's going to start shaving soon! Speaking of shaving... Here's a pretty bad video of Sneaky freaking out while I was cleaning out the hair algae. He still tries to hide in the gravel like a larva. But you can see how ridiculously good-looking he is :

So when is sneaky gonna meet his parents? I guess the choice to stay in the water speeds up the development process a lot.

antcatcher11 said:
So when is sneaky gonna meet his parents? I guess the choice to stay in the water speeds up the development process a lot.
Click to expand...

I'm considering having him swap places with his father. Mostly because the females need a break from the male. But I think Sneaky might still be small enough to become a possible snack for them - they'll really go after anything 'new' in the tank.
A

Oh, okay. Is there anyway you can get a size comparison of sneaky with an adult? Its kind of hard to guesstimate based on the pictures becuase he so adult-like.

Hmmm... He's about 3 inches long, and his parents are around 4. I think it's more the novelty that I'm worried about: they always have to taste anything new in the tank (even new plants).

Just a couple of pics from this morning (everyone was out eating termites). There are now 7 new morphs in the eft tank. I was a little worried that they would be be small enough for big eft to eat, but he (she) is completely ignoring them. Big eft is also quite efficient at begging too: Here's big eft on his (her) fern - apparently the best spot in the tank to beg for worms:

And one of the new morphs searching for food:

I actually see 3 or 4 of these guys out after each feeding, which is a good sign I think. Whether it's always the same 3 or 4, I don't know.

Even more updates: I have 3 big larvae still in the larval tank, and many new hatchlings in the adults' tank

Aaawwww so lovely
I really love this thread Erin, it´s great to se the progress of such an oddly unusual species....and a beautiful one too!
I´m really enjoying my N.v.viridescens, they sure are an impressive little thing to see. Sneaky is a looker!! He´s going to be an stallion xDD

Sneaky looks more manly (newtly) than ever. Do young male newts ever just put down spermatophores when there are no females present? Because I think that's what he was doing the other day... Typical teenager

I cleaned out his enclosure yesterday and found two very large larvae - they must have come in as eggs on some plants. I'll leave them where they are for now. Otherwise everyone is the same. The weather's turned warmer here so hopefully the breeding will stop for a little while.

Today he's courted: my finger, the camera, a large larva in the tank with him, a worm (just before eating it), and the tweezers. He's not very good at it yet, but he's got his dad's moves I feel a little bad for him - he's such a teenager.

Two weeks have passed - time for another boring update!

Sneaky is doing well, but he's still courting and not eating. He looks healthy though even if he's a little thinner than before. I'm hoping the warmer weather here will 'cool him off'.

I moved my largest eft to a new terrarium... and she still hasn't forgiven me. She spent the first week or so pressed up against the glass, staring into her old home. She's still eating well, though: small crickets and earthworms. I left the medium-sized eft in the larger enclosure with the tiny new morphs. I see two tiny guys regularly and they are out a lot and easy to feed. My fruit fly colonies collapsed, so they've been eating termites and chopped up earthworms. One of them lives in the same hole as the medium eft, making feeding difficult. Otherwise, they are doing well. I'll be happy if I can get just two out of the seven I started with - that's good enough for me.

I have three large larvae: two living with Sneaky, and one on its own. After all of the others in the the larvae tank morphed, that last one has decided to just hang out. Strangely, it wasn't noticably smaller or younger than the others. Maybe it will follow Sneaky and go straight to the adult stage.

Anyway, that's about it. The parents are doing well. I'm getting ready to move (groan!) so they'll be enjoying another stay in a Gatorade bottle soon. Hopefully it won't be too stressful.

Okay, today I have pictures

When I got up this morning, everyone was out climbing on the fern (a favorite eft pastime - no one told me these guys love to climb so much), so I took a few blurry shots. The largest guy up top is medium eft, and the two smaller guys are a couple of the new morphs. I'm going to assume that these two are all that are left out of the seven original morphs, but they look fat and happy: 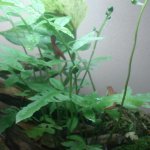 Everyone had worm bits after I took these. I couldn't get a good shot of big eft, but she had a worm too.

I will continue updating... forever

Of the four large larvae left from Nov/Dec of 2008, one of them has started to get adult colors while keeping his/her gills:

Looks exactly how Sneaky looked at that age, so maybe I'll get a couple more that go straight to adulthood. One of the other larvae - the one kept separately - is much bigger, but still has that spotty brown baby color. None of them show any signs of wanting to morph, which is nice.

Leaner and meaner, but I have seen him eat very occasionally. And he still looks healthy to me - maybe just not as fat as he was before, which is probably a good thing because he was seriously spoiled

It's been about a million years since my last update

Everyone is doing well. I have four small efts left from the last batch to morph and they seem to be doing well. I released another new morph into the eft tank last night - he was actually a pretty good sized little guy. I'm actually watching these guys eat fresh termites right now.

I see big eft and medium eft a lot less than I used to. Maybe they've entered the shy teenage stage. I'll dig them out occassionally to check on them and they both look healthy and fat.

Sneaky looks great now. He lost his nuptial pads and big tail fin (and so did his daddy, finally!) and he's now eating well. I only have one large larva left, but I think he's probably getting close to morphing. I've been keeping him separately and feeding him well in the hopes that he'll remain aquatic, but I'm not sure how well that's going to work.

I counted six small efts at feeding time last night, which is more than I thought I had. Plus big eft and medium eft, makes eight total efts.

Here are a couple pics of the smaller guys. Sorry for the quality - it's hard to shoot through misty glass. This first pic actually contains three efts (one is standing on his/her sibling's head): 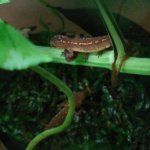 And a shot of big eft, who is looking fat and healthy:

They look so cute The three efts are like a basket of kitties xD
I just saw one of my aquatic notos displaying breeding behaviour(i guess i was right when i thought it was a male), just like Sneaky in his teen days hehe. I can´t believe they are already showing signs of sexual maturity...and at this time of the year....Ô_o

They are wiley little creatures, aren't they? Sneaky had me pretty scared there for a while, but he's definitely calmed down.

My last larva morphed yesterday, which I'm kind of depressed about. I was hoping he'd stay aquatic like Sneaky, but apparently he had other plans.

I'm just curious (and I don't really expect any replies), but did anyone who received eggs from me have any success? So far, I don't think any of the ones I've heard about have done well It's pretty confusing to me, and I'm wondering if the eggs might have gotten too warm during shipping or something.
Y