I collected a clutch of what I'm pretty sure are spotted salamander eggs from a roadside ditch that is scheduled to be filled in. I believe they're 2-3 weeks old now. I'm hoping to hatch them and care for them until they've metamorphosed and then safely re-release them. I'm totally new to this and I've read everything I can about it but still have so many questions! Here's what i'm doing and my plan so far - I will be grateful for any feedback!

Any insight, advice, or criticism will help! Thank you so much.

Hi Jules! I have actually been doing the same thing and I have successfully hatched 4 clutches of eggs. I would love to help you with this. (You can message me personally too.) I began with a thousand questions just like you. Ill take you through my process.

One: I put my clutches in plastic containers covered with water. Originally I sourced the water from their pond, but as I lived 40 minutes away, I use declorinated water.
In each tub, put live plants. Change half water daily. When they hatch, change as much as you can daily until you are ready to put them in the tanks.

Also, those white eggs need to be Removed asap. They will infect the rest. How to do that is take a sharp thin knife, cut into the gel and gently move it around until you can get it to pop out. (Careful not to squeeze any of the good ones) if you have to, you can cut sections of the gel off to keep infected gel away from good eggs. It's better to have a shit ton of little globs than a big one that keeps infecting the eggs. I lost my first clutch that way.
If you accidentally pop Good ones out, that's OK put them in a glass that you can clearly see them. Keep them aside. It's really cool to see them grow up close.

Some of the eggs won't develop past a certain point. That's OK. Leave them unless they turn white.

Two:when they hatch, I kept them in the containers until I saw that they were eating real food. They will sit at the bottom motionless for 2 or 3 days. Then they start to eat either the egg gel and or the food you give them. I fed them black worms. Go to your local aquarium stores. Ask if they regularly get worms in. Those are the best foods you can buy on a pinch.

Grow your own food if you can.
Daphnia
Baby brine shrimp, super easy but they are for the little ones mostly.
Black worms. easy to keep but slow to grow. Still they are my main food source.

Always have multiple frozen food options in emergencies. Petsmart or aquarium stores have Daphnia, brine shrimp, blood worms (my newts turn their noses up at those... literally lol with attitude)

Three aquarium set up! Put 1/2 inch of gravel or plant substrate down for the plants. Put in as many plants as you can. Floating plants are great too because they don't obstruct your view. Then, put in some sand. Place less sand around the plants. This will allow the plants to get the nutrients from their poop but the sand everywhere else prevents poop from getting in the gravel. This way you don't have to do gravel cleaning hardly at all (especially while they are young) you can just go around and suck up the poop. Hint: put a dish on the sand before you pour water in. That keeps it from stirring up.
Let it all settle a day or so before moving them in.

Filter. $5 air pump from petco
$6 sponge filter from online or aquarium shop.
Don't even bother trying anything else... trust me.
The current will be too strong with others.

I also put a feeding dish in the sand so that there is an easy to clean area for the frozen food but also, the worms will stay there because I put some gravel in it for them to hide in.

Four when mine started eating the worms I placed them in the Big tanks. Safest way that I found is by sucking them into a large hose instead of nets. Careful not to let it go and watch them fly out of the hose.
I moved them as they individually grew. First day I put 5 in the tank. Second day it was 3. 3rd day it was 8 ect. Until all 37 of my first clutch was in.


Fifth. Something I was surprised by was that when all 37 were in the tank, some of them grew a lot faster and started to bite the tails of the smaller ones. I had to separate the big ones and made a new tank for the biggest 8. Also that means they might not be getting enough food. Give them more LIVE food at night. They are nocturnal. You can leave all the live food you want in the tank but frozen food will cause ammonia. My tank has a type of snail that is omnivorous so they eat the leftover over frozen food. (But you still have to suck out as much as you can after a few minutes) this is why I love the worms and Daphnia. When I went away for 3 days, I put a lot of worms in the gravel and they lasted 2 or 3 days.

Culturing and keeping black worms. I keep mine in a large plastic tub with some gravel in it, declorinated water, plants floating, and an air stone. Water changes make harvesting them easy.
But thats where I am in the journey. They are a month old now and I had to rescue some more. The new ones are 4 days old.

Almost everything I learned was from this website and YouTube. Here are pictures of my babies and their journey.

Feel free to message me directly its super exciting 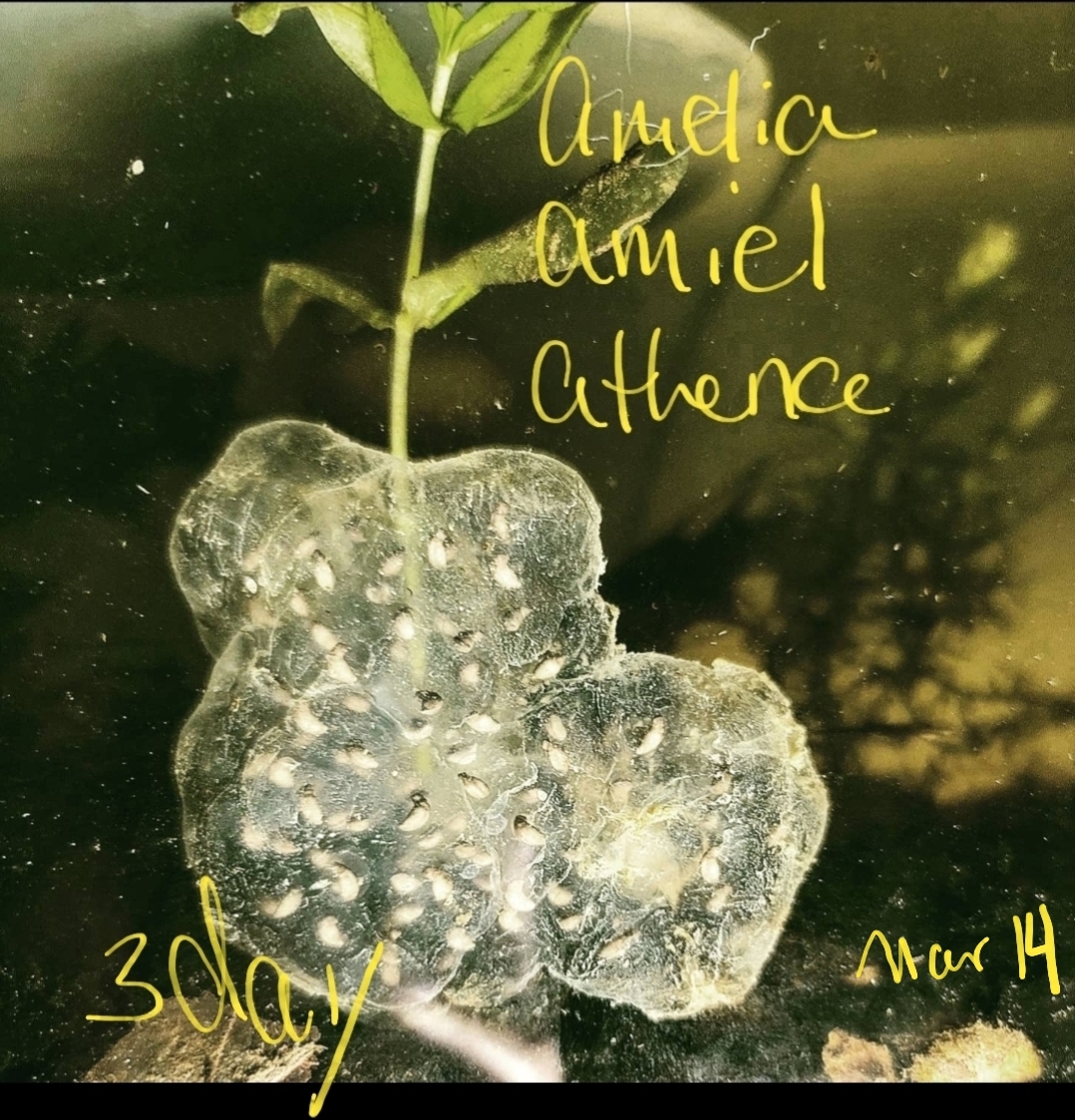 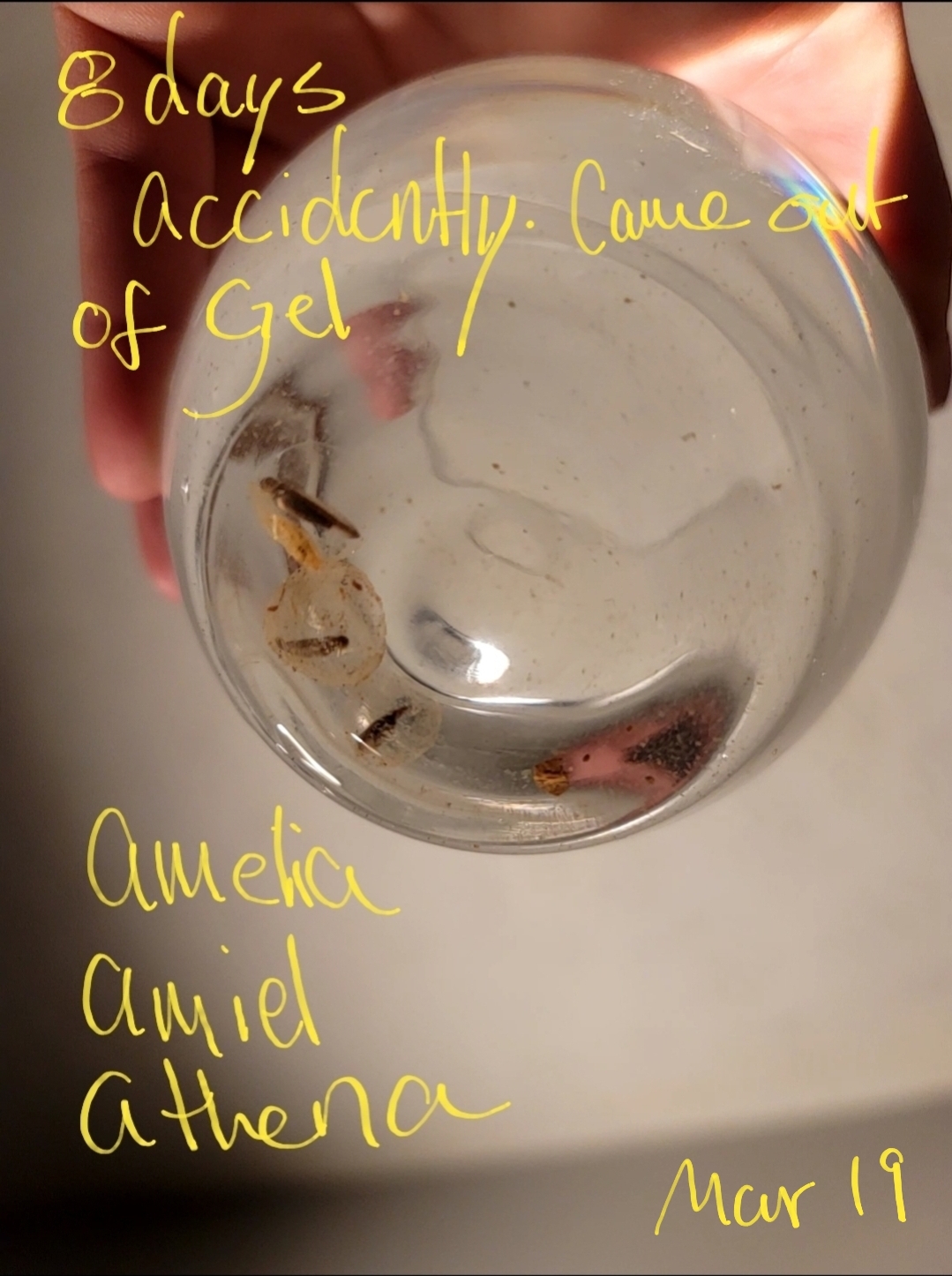 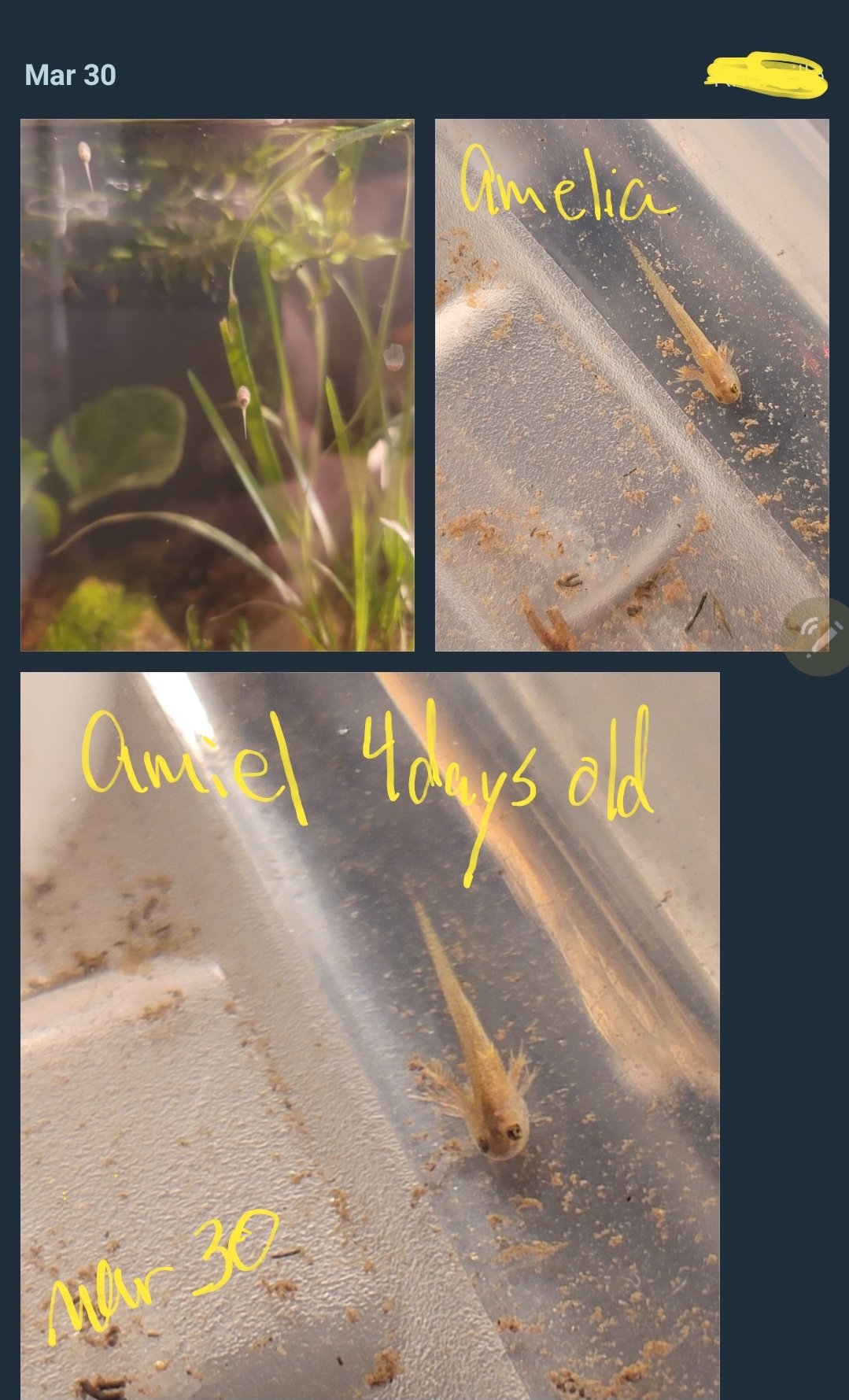 this will be the biggest they could get in 5 weeks. All will be eating big food such as worms and lots of daphnia.
To go away for 9 days make sure there is lots of live food in the tank that will help when some one can't come over every single night. 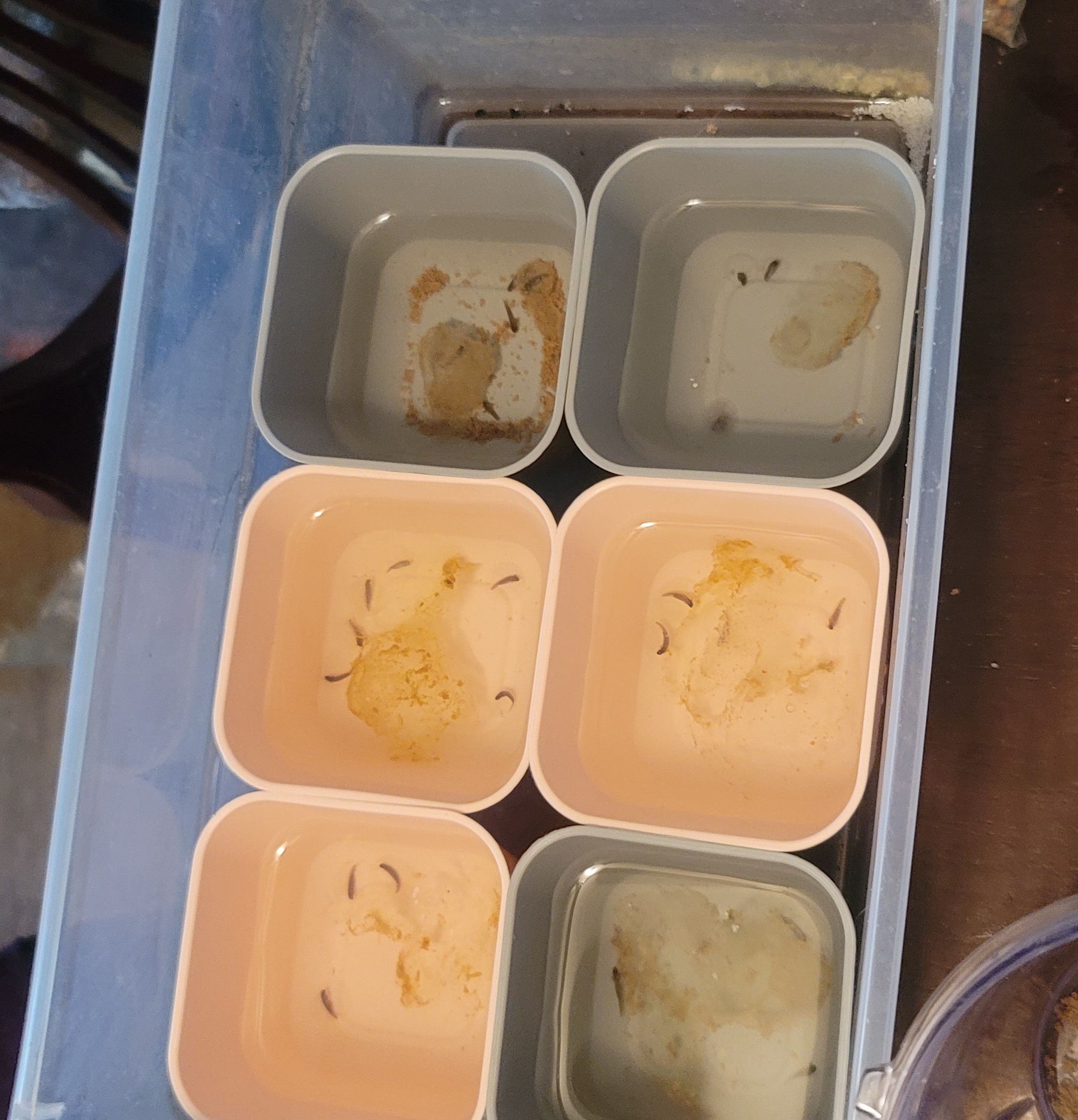 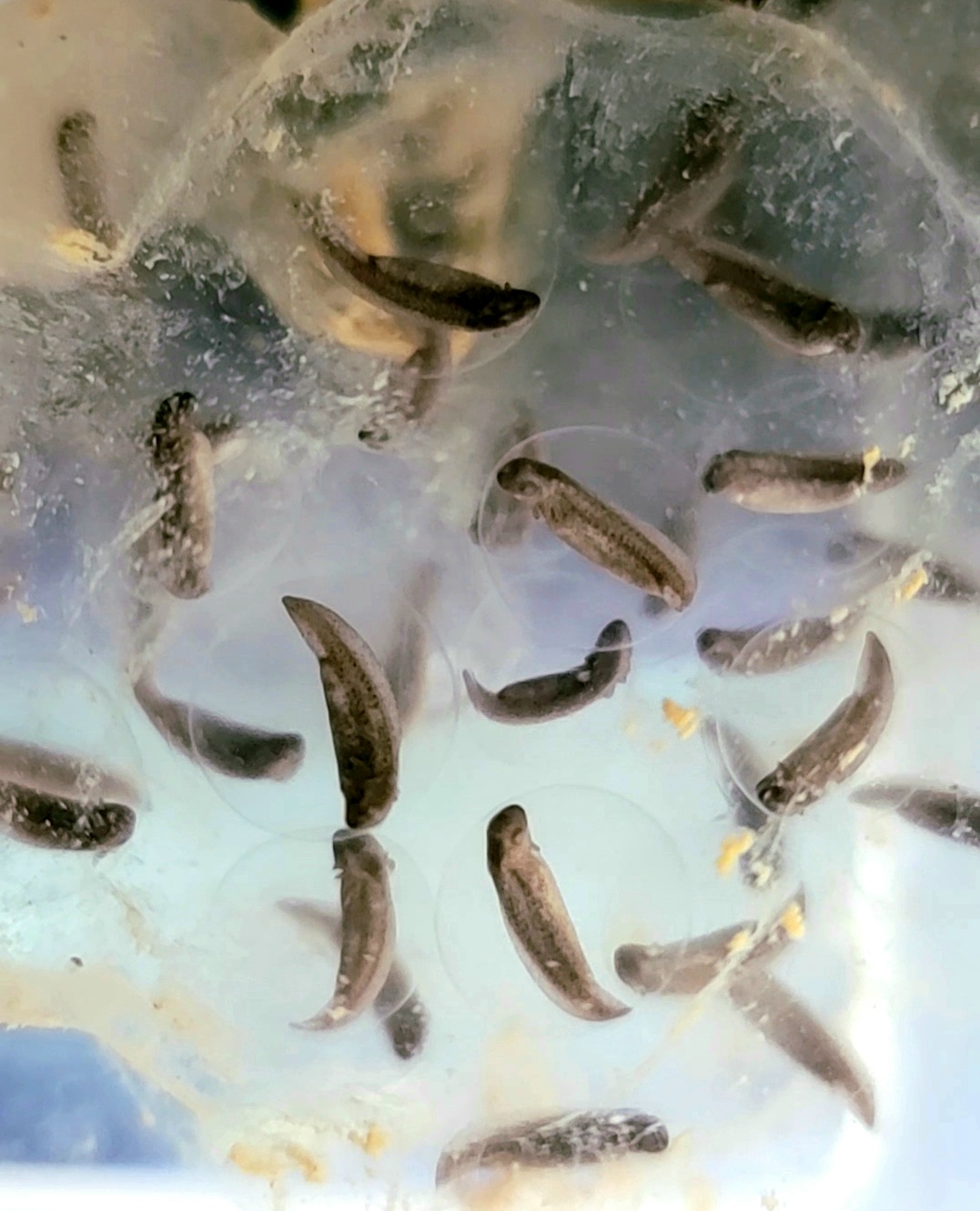 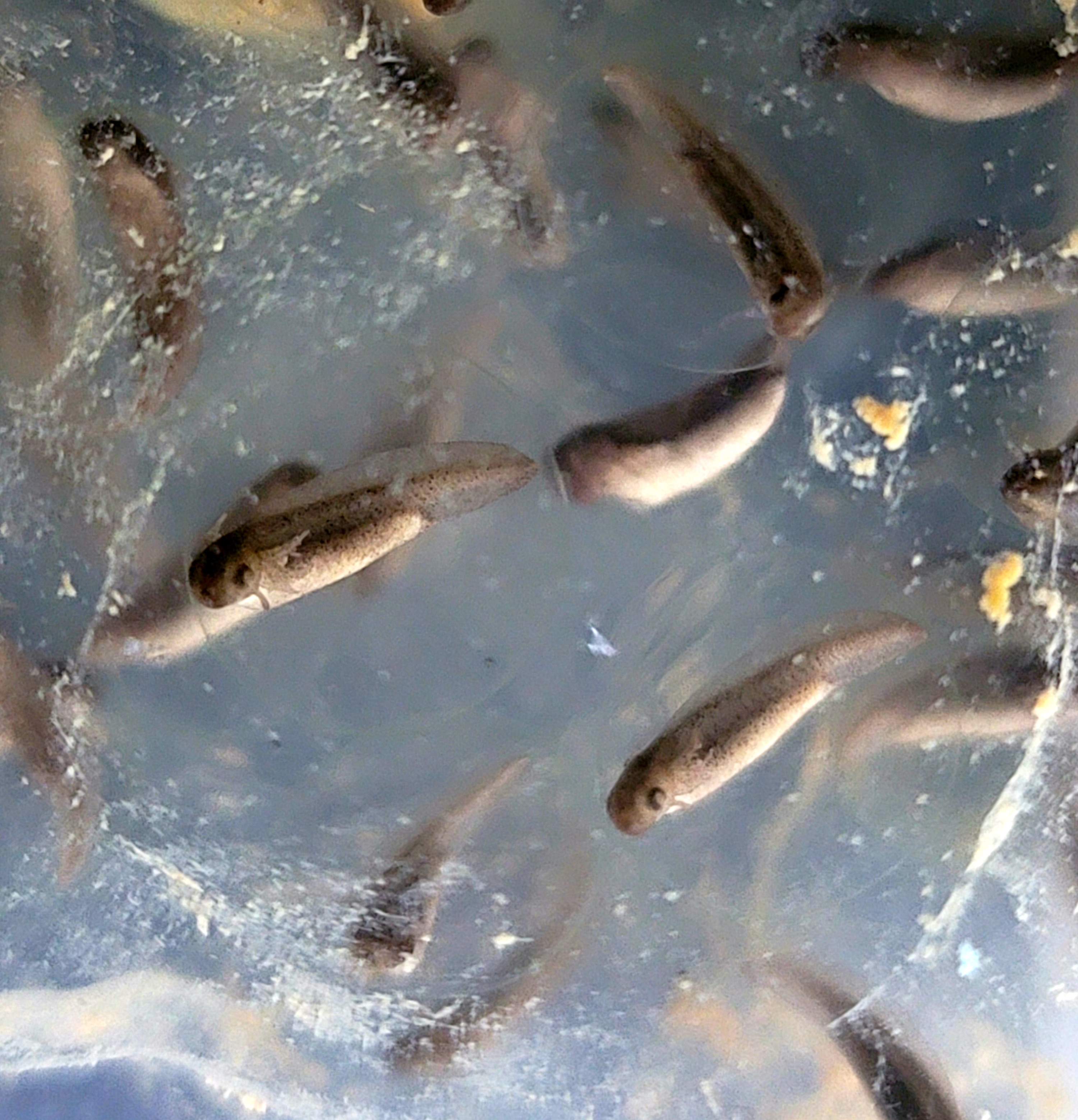 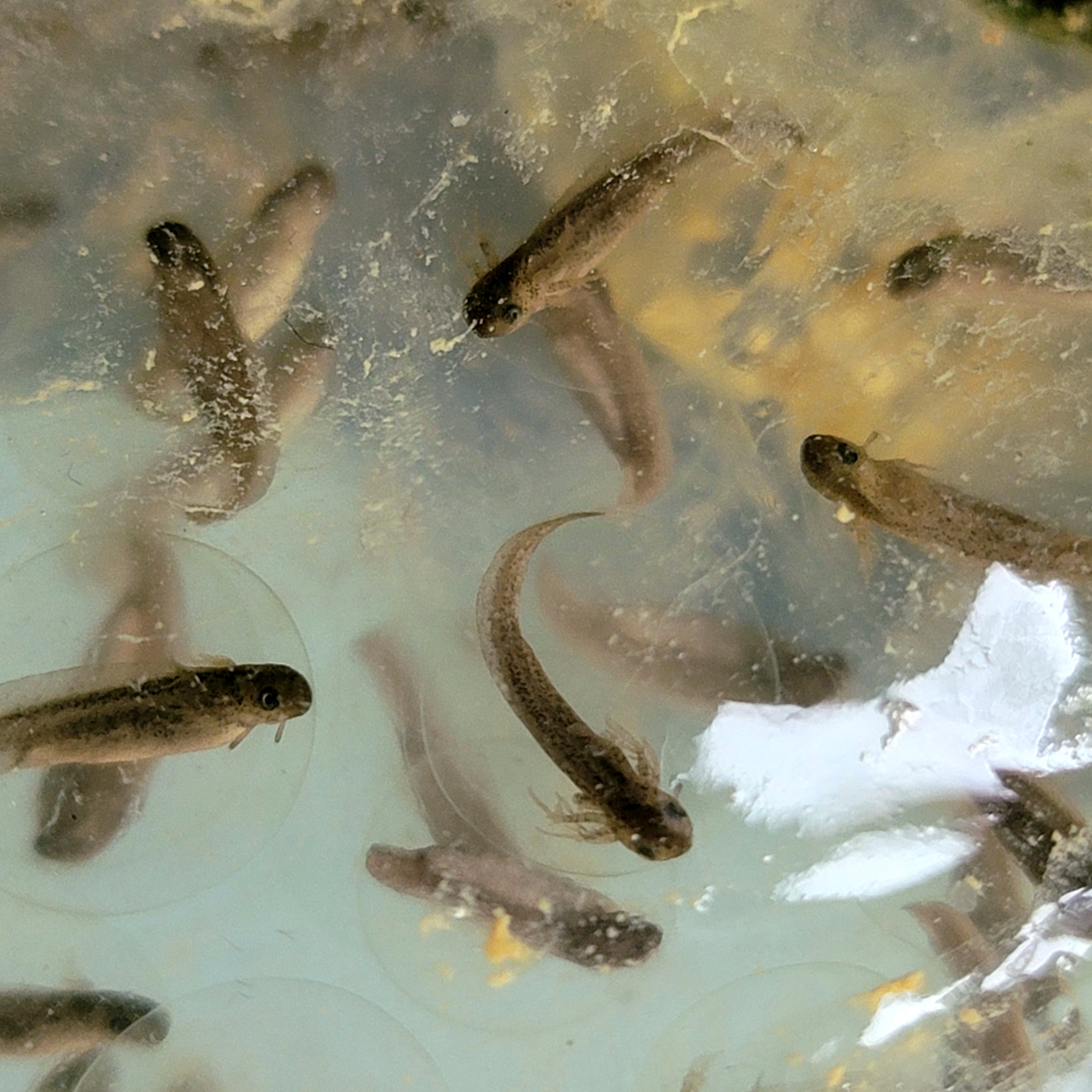 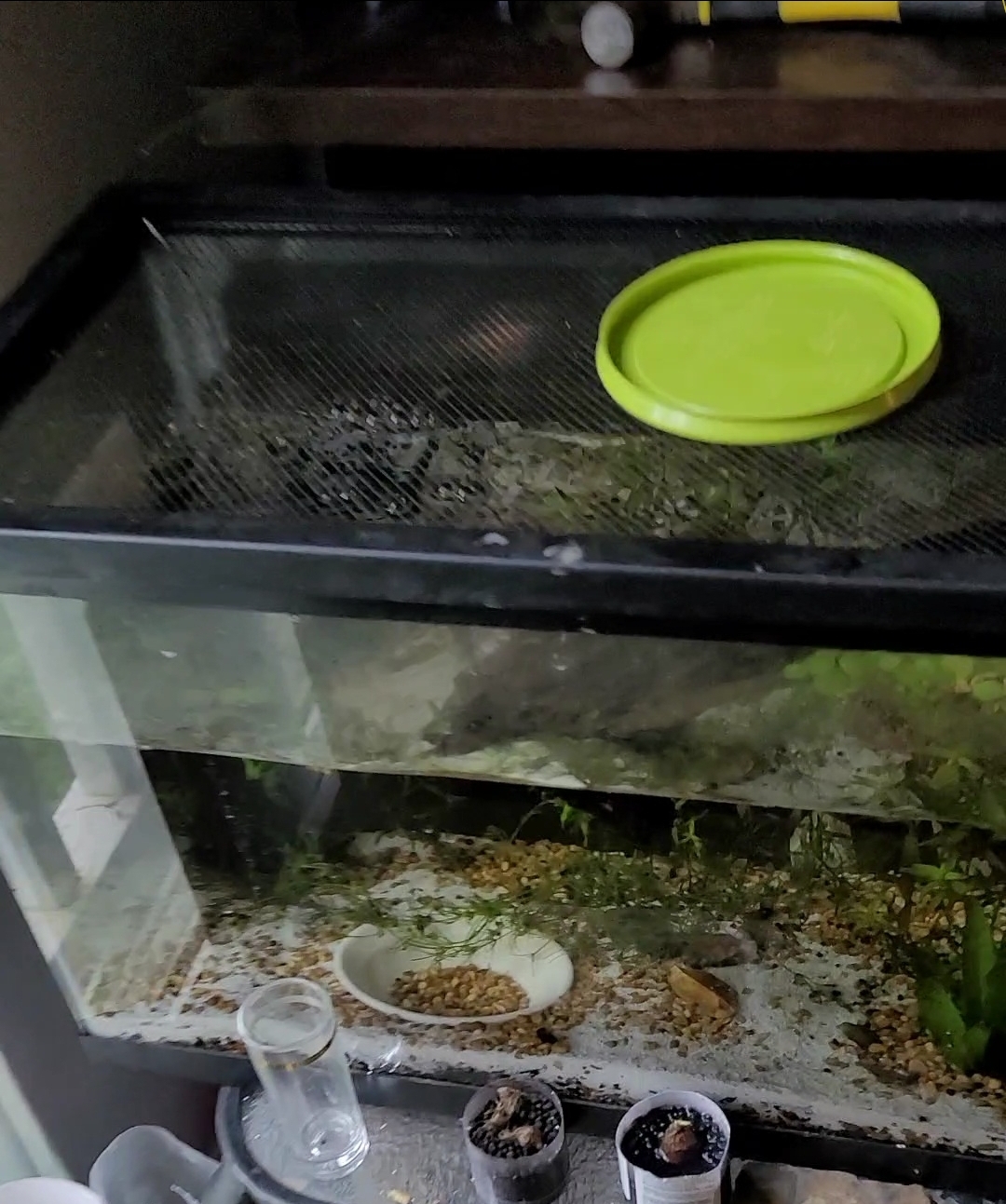 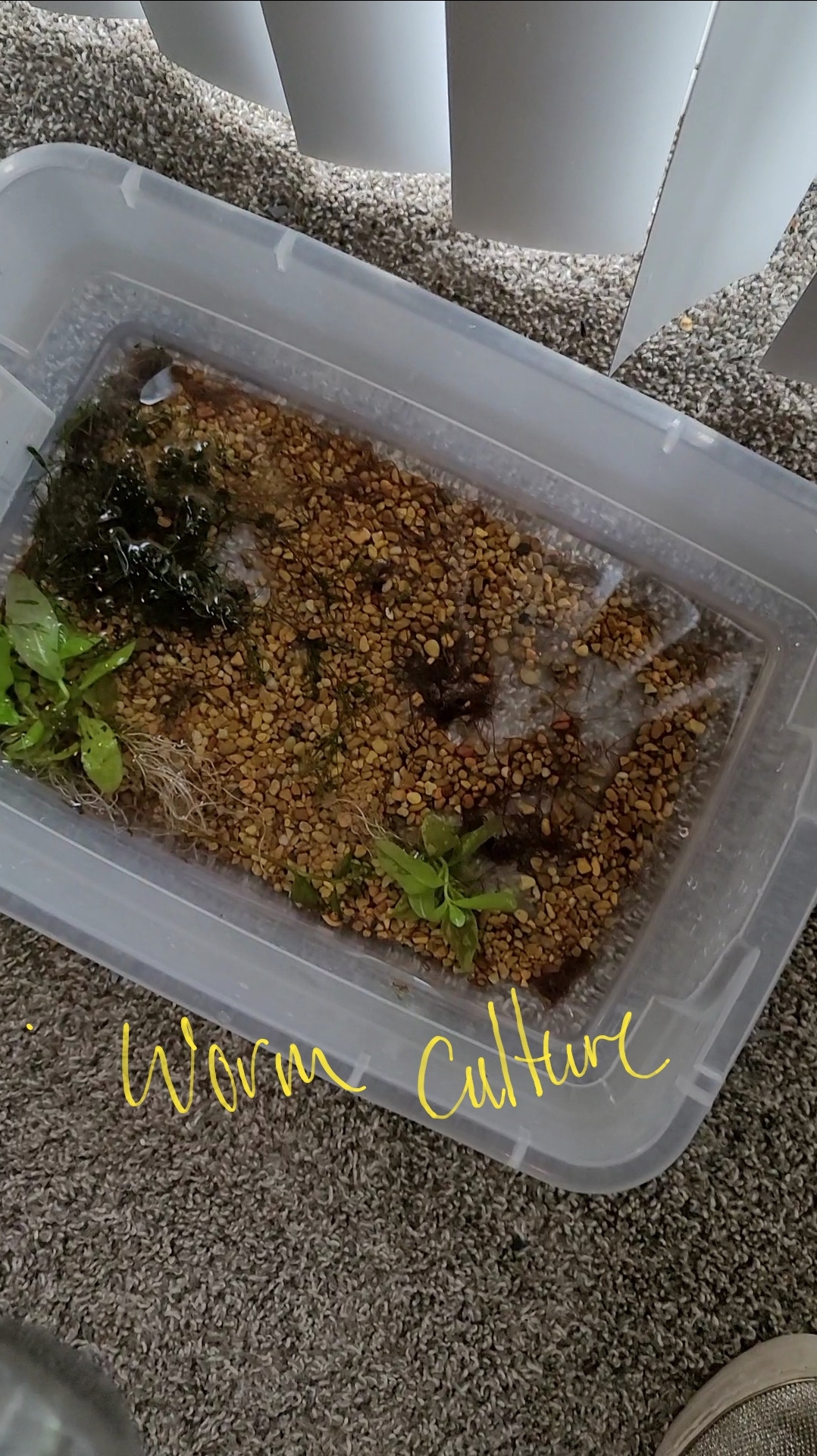 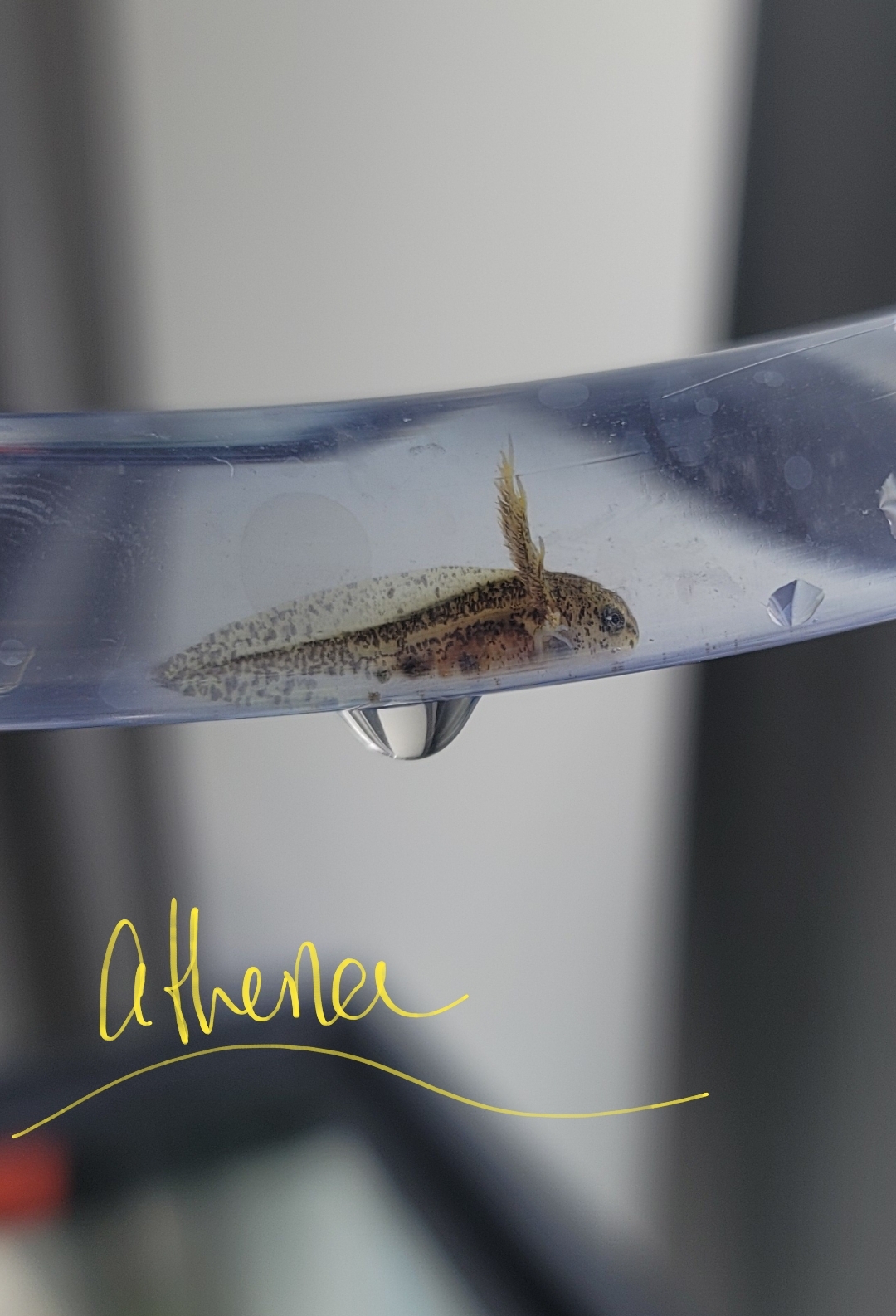