Springtime in the Gulf Coast-Salamanders and Reptiles (2/2)

The next morning we met up with our friend Noah, local herpetofauna expert to start off our day in search of greater sirens in the floodplain of a sandy-bottomed river. There were none in the traps he had set overnight, but we managed two lifer Peninsula newts that were dip-netted in mats of aquatic vegetation at our first location. While we were ambling through the shallow swamp, Noah pointed out a “tree snail” to me and also identified a huge apple snail shell that I found.

We headed off to a totally different habitat further south with sandy scrub habitat in search of endemic Florida scrub lizards and gopher tortoises. We saw several baby gopher tortoise burrows and two Florida scrub lizards. Later in similar habitat we turned up a Peninsula mole skink and even saw a rare Florida sand skink! I never even thought we would’ve seen that species on our trip. Check the box for another incredible find! I snapped a few photos before it swam under the sand. 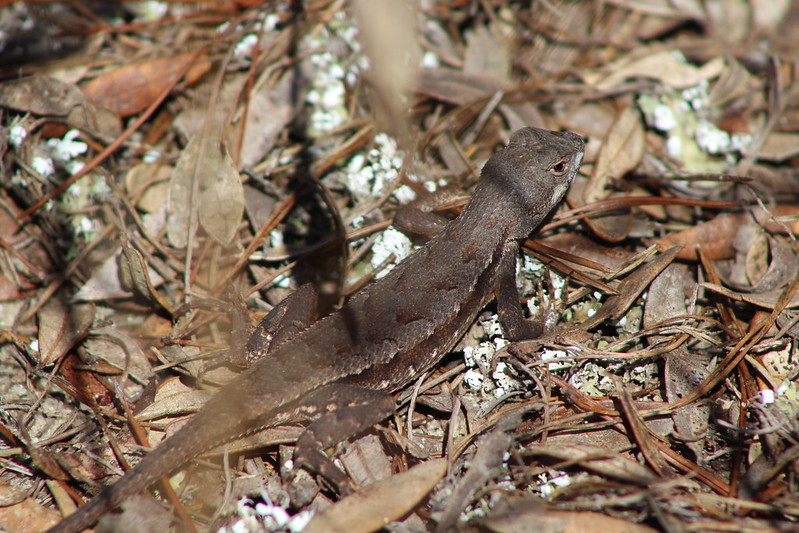 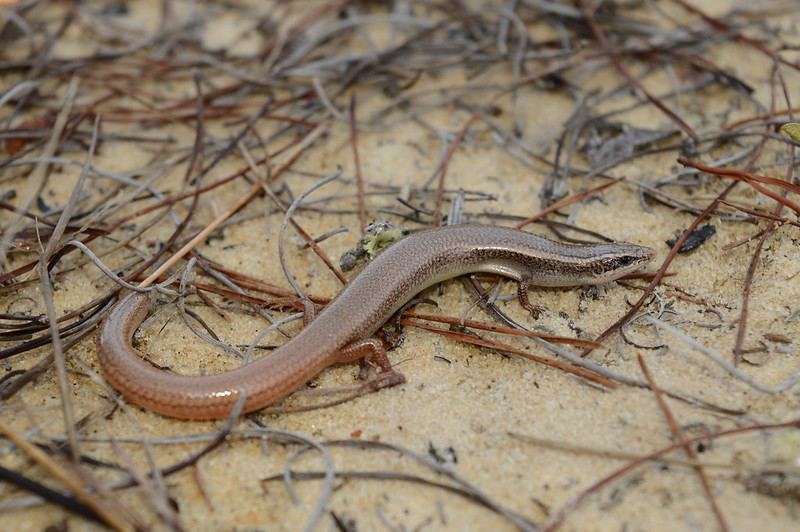 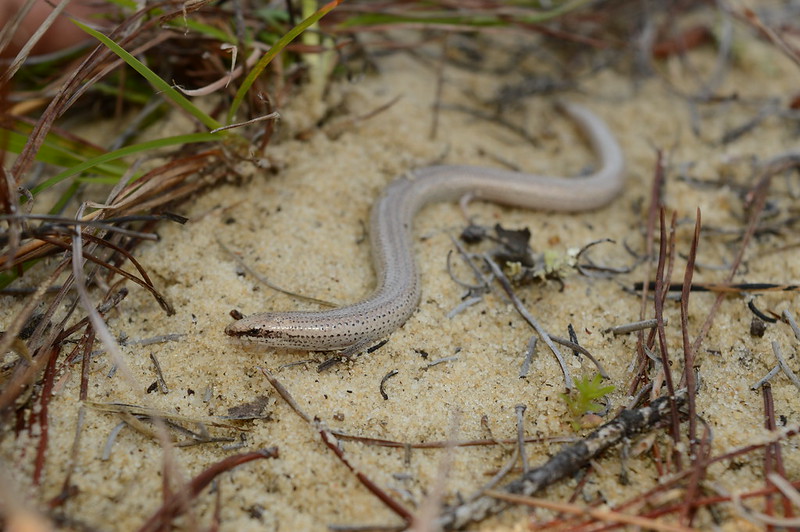 On our way to our next striped-newt pond we decided to traverse a sandy road and go out of our way a little to see if we could find any adult gopher tortoises that happened to be crossing the road. Instead, we cruised up this beautiful sub-adult Florida pine snake! Noah was in the car ahead of us and so reached the snake first. He threw up his hands in excitement and right as I was close enough to see for myself, he exclaimed “PINESNAKE!” He had been hoping to see one in the wild for quite some time and was visibly shaking from the excitement of this rare and elusive find and about fainted! Nathan and I were extremely excited with this find too, and thought it was pretty spectacular that we saw a pine snake on our first-ever herping trip to Florida. We spent the rest of the day dip-netting for various aquatic salamanders and turned up several striped newts that were larger than the ones still in their larval form at Nathan’s location further west. We later caught two larval greater sirens and a musk turtle by dip-netting aquatic vegetation near a bridge. We tried our hand at one final spot for sirens and dip-netted for them in a huge pond with lots of floating vegetation. Noah taught us that the best way to catch them is to wade into the water, scoop under the aquatic vegetation with a strong d-framed net, then pull up a mat of it and carry it to the outside edge of the water and stack up the vegetation into mounds. Once you get a big enough mound, sift through it and throw the vegetation back into the water as you go. If there is a siren that you didn’t see in your net initially, you can see it hiding in the pile of vegetation as you sift through it. We found a two-toed amphiuma this way, but no such luck with our goal siren. A neighbor living across the road from where we were dip-netting was curious about what we were doing. He asked “Are the alligators leaving you alone?”. We chatted with this friendly man about his observations of alligators on his property and we explained to him that we were looking for aquatic salamanders. He was fascinated with the amphiuma we caught and had never heard of them before. He was happy to learn of a cool species that lived right across the road from him. It was really nice to meet him! Our final find of the day was a pinewoods snake that Noah found while we walked along a cypress pond in search of Coastal plains dwarf salamanders. 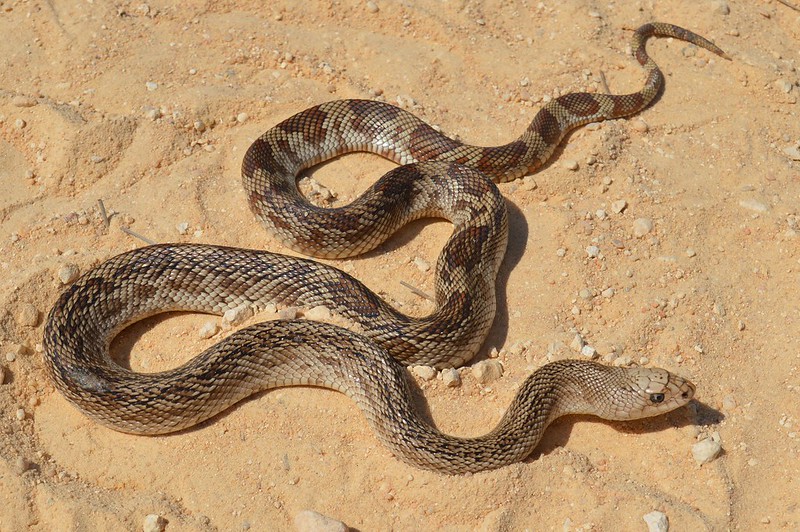 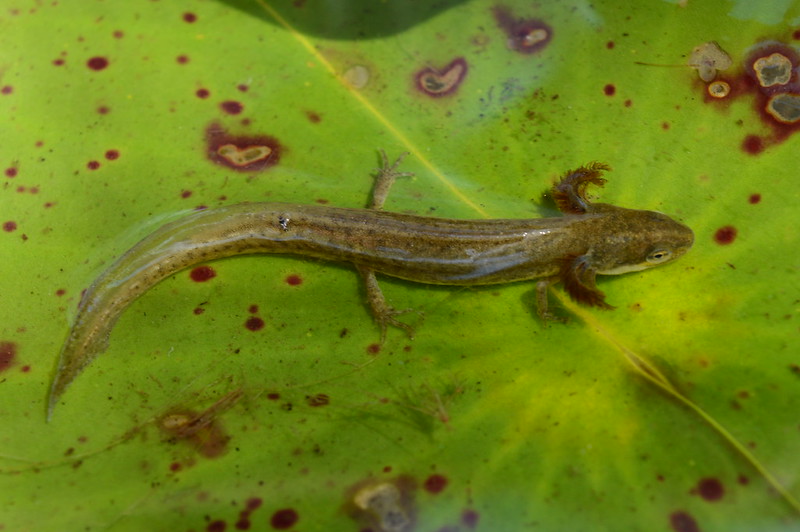 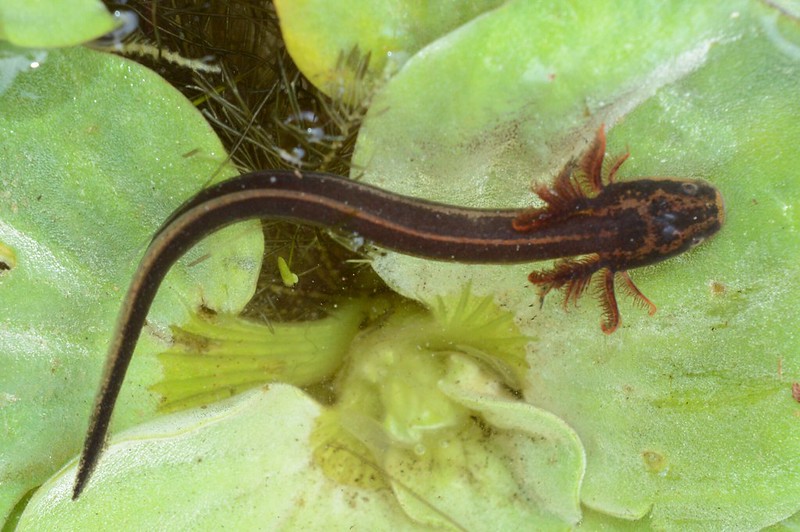 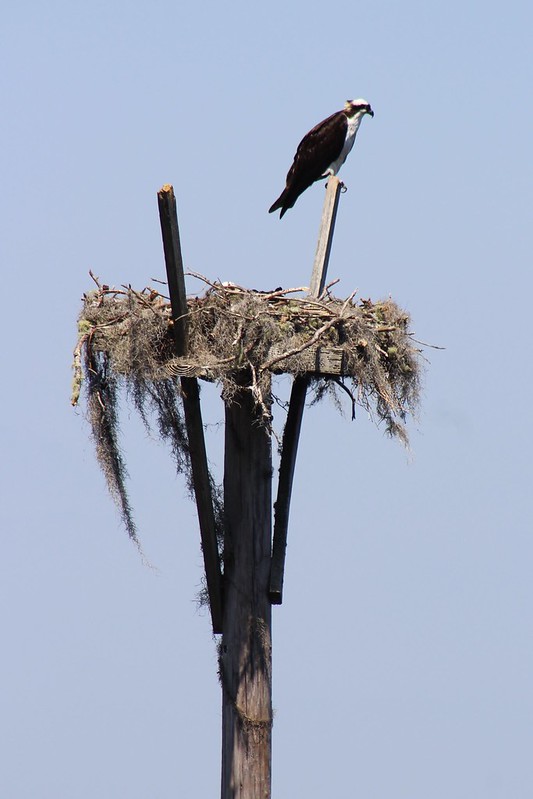 Osprey male and female at nest 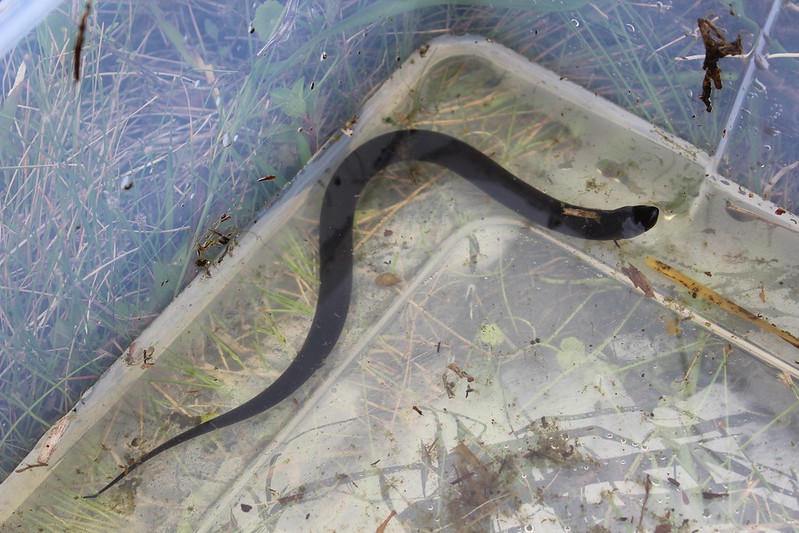 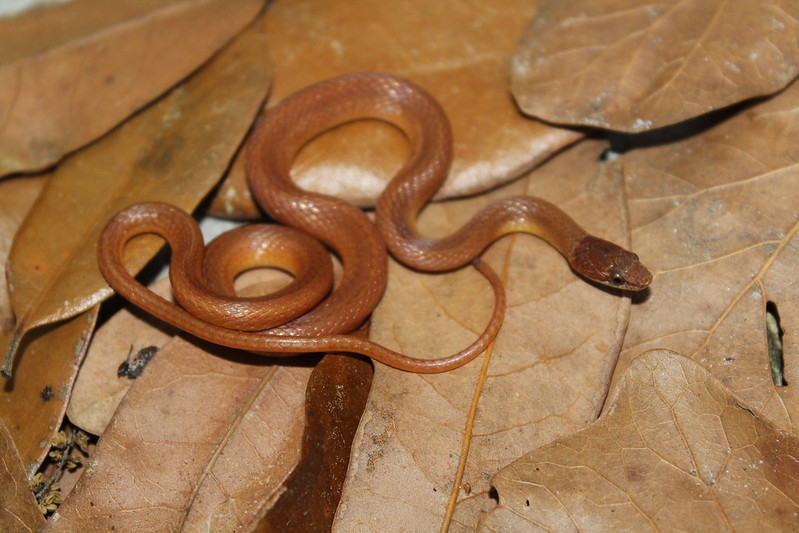 Georgia was the final state in our herping trip. Our goal species were Ocmulgee slimy salamanders, gopher tortoises, and the last dusky salamander to complete the Desmognathus genus (yay!). We drove quite a bit to get to a central Georgia locale where Nathan was determined that we would find an Ocmulgee slimy salamander. I was determined that we also find a gopher tortoise! And we were successful in both! I was so excited to see a gopher tortoise because they are such an integral part of that sandy savanna type of ecosystem. They build burrows in the sand where they, and upwards of 80 other species that have been documented, take shelter and thermoregulate. We saw multiple burrows but still hadn’t seen a tortoise. Finally I double-checked one large burrow to make sure there wasn’t a tortoise close to the entrance. I ducked closer to the burrow and saw an interesting pattern in the darkness that looked like something but I couldn’t tell for sure what. I didn’t want to call Nathan over just yet in case I was wrong. I pulled out my phone’s flashlight and revealed an adult gopher tortoise! I was thrilled to be able to see one! We snapped a few photos and took some video of it in its burrow. 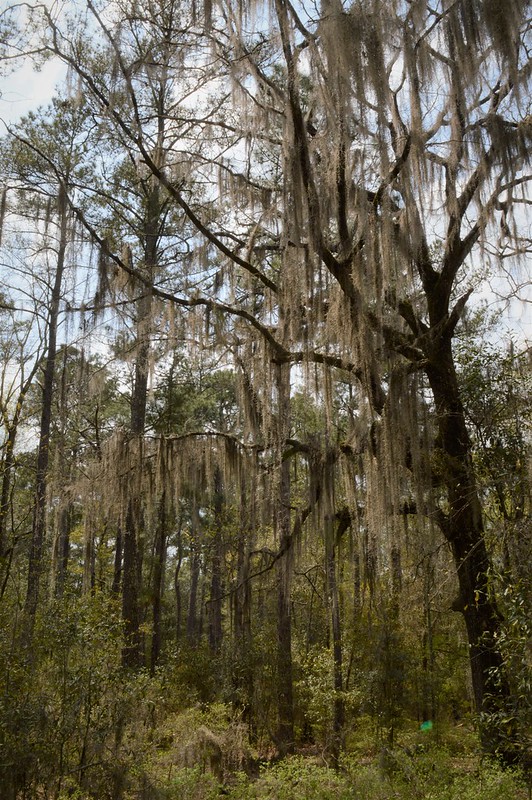 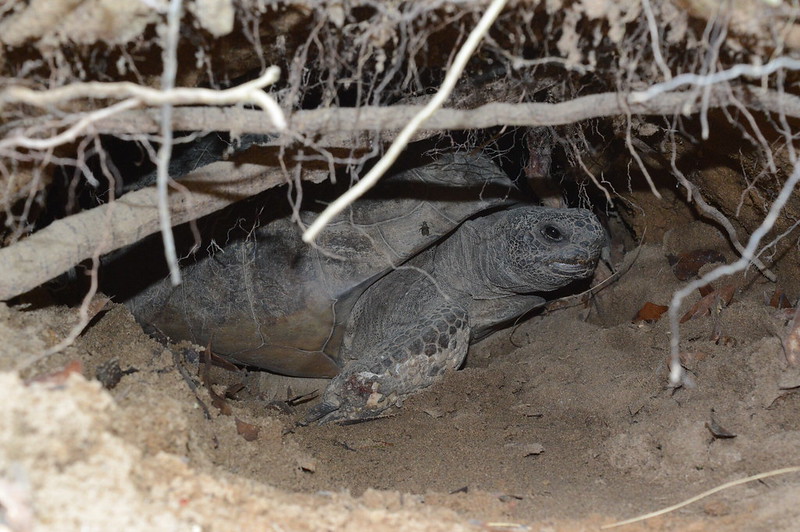 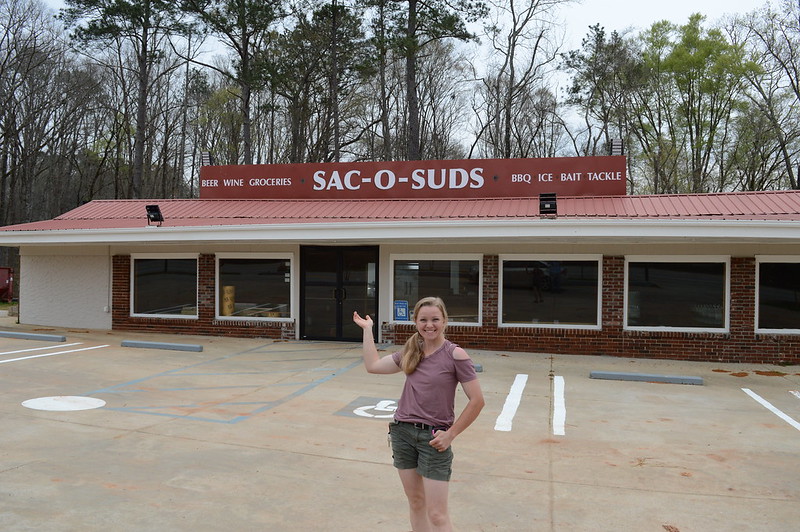 Nathan surprised me with a swing by Sac-O-Suds, where the initial scene of My Cousin Vinny (one of our favorites) was filmed as we headed north through Georgia

The final location of our trip was in northern Georgia to find the very last species of Desmognathus that we needed to check off our lifer list: the dwarf black-bellied dusky salamander. Nathan and I pulled the car off a curving road in a pull-off next to a cascade. Within 15 minutes I nabbed four different species of dusky salamander. For being such an annoyingly common species, I actually missed being able to see them. They don’t live here in Missouri, or anywhere else west of the Mississippi for that matter, with the exception of Ouachita duskies in Arkansas. Dusky salamanders are semi-aquatic and therefore extremely difficult to catch. It is important to have a net handy to aid in their capture (and plastic bags for easier identification before release). I caught Ocoee duskies, spotted duskies, a black-bellied dusky, and finally our goal species, the dwarf black-bellied dusky salamander! It was surreal to have seen the final member of the genus Desmognathus. And kind of bittersweet, too, because dusky salamanders are such an icon of the Appalachian mountains. Nathan and I love Appalachia, and finding the final Desmognathus sort of symbolized that Nathan and I have been through many wonderful travels together through the mountains that we love so dearly. With that, our herping trip was over and the family gathering fun began in Tennessee! 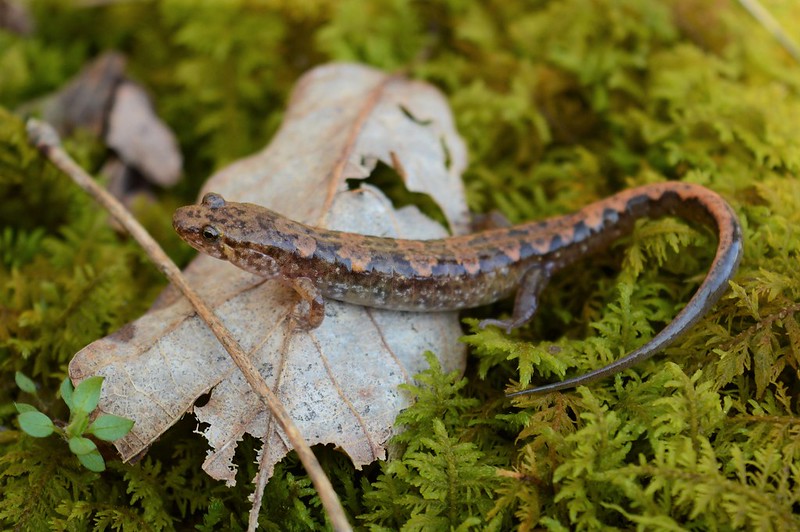 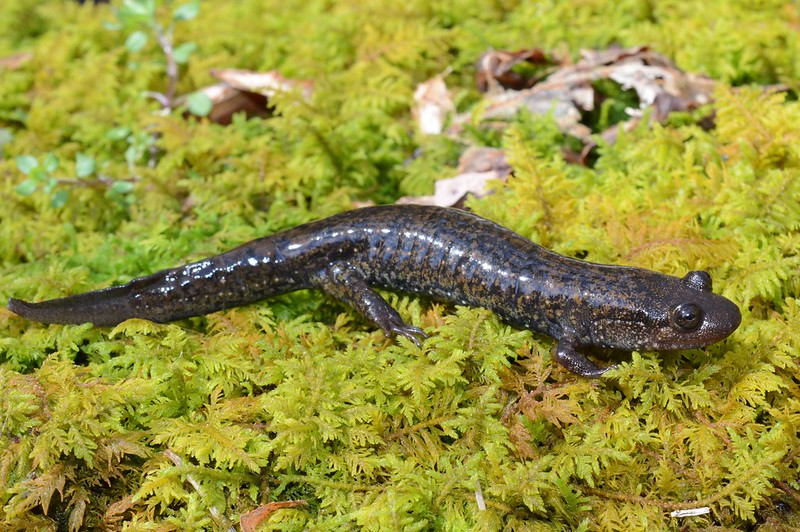 Georgia waterfall where four species of dusky salamanders were found.