(Note: WA as in Washington State) I tend to come across amphibians and reptiles while out hiking or when building/working on hiking trails, and thought folks might appreciate hearing about my sightings and seeing some pics. I'll do my best to name species, but feel free to correct me if I am wrong

My profile pic is a Rough-Skinned Newt (Tarchia granulosa) that I came across while hiking in the North Cascades, on a trail that follows a river into Wilderness Land (so, Old Growth/Never Logged). The newt was actually sitting in the middle of the trail, so I picked it up to have a look before gently relocating it off-trail so the poor thing wouldn't get stepped on by somebody else. Unfortunately, the newt seemed a bit camera shy, so the pics I got are not the greatest.

Funnily, not long after I had an encounter with another Rough Skinned Newt who seemed to like chilling in the middle of busy trails. This time, a popular paved bicycle route. I noticed another cyclist stopped and holding something, so I stopped as well to see what she had found. The other cyclist said "I found this in the trail, I don't know what it is or what to do with it" and to my surprise, she had a newt in her hands. I told her she had a Rough Skinned Newt, and that it was the most toxic amphibian in the state, so she would probably want to go wash her hands. And that the little guy would be just fine if she set it in the wet grass off-trail. (Unfortunately, couldn't get close enough for pics because Covid and 6-feet and all that)

Salamander time~! I was doing trail construction in a park out in the farmlands on a trail that circles a small lake. I was removing the Duff (aka: the organic soil layer) as we were cutting a new section of trail, and uncovered this little guy! I believe it is a Ensantina Salamander ( Ensatina eschscholtzii ). The salamander was quite quick and not happy to be held, so I snapped some pics as best I could before relocating it off-trail a safe distance from our work site. (Feat: my clawed gloves cause I love to dig in the dirt by hand)

When hiking through an urban park completely surrounded by housing developments, the last thing I expected was to come across a mole salamander! (The park is several hundred acres and contains wetland, but still an unexpected surprise) This Northwestern salamander (Ambystoma gracile) was just hanging out in the middle of the trail in the shade. Didn't mind at all when I laid down on the trail to get a low-angle shot, then I decided to leave the salamander alone to continue it's day.

In the same park, I also saw a garter snake that darted off only to watch me from the brush. And, exciting to me (a bird nerd. Birds are almost reptiles, right?) a juvenile Cooper's Hawk hanging about. I chased after the hawk for awhile trying to get a nice shot, but was only moderately successful.

Thanks! I still argue with my camera from time to time to get it into macro mode, but I can usually get it to cooperate.

Western Washington, with our mild temperatures and rainy weather, is not a place that brings reptiles to mind. But, we do have them! And some of them, I don't even have to leave the city to see them.

Turtles are extremely common even in the middle of the city, primarily the invasive Red-eared slider. I can expect to see them out on any sunny day, sometimes in very large groups. (Native to the area, we have the Western Pond Turtle, and the Painted Turtle)

Of more surprise to me was to come across a lizard while hiking in an urban park. We have very few species of lizard in the Puget Sound basin (I think only 2 or 3) so I was very surprised to see a lizard sitting atop a log sunbathing right next to the trail. I threw out a hand and yelled "Wait!" to the person I was hiking with, then got as close as I could for a photo without scaring it. It is, I believe, a Northern Alligator Lizard, the Northwestern subspecies ( Elgaria coerulea principis )

Today, I went out for a hike in some mature old-growth forest in the mountains. It wasn't raining, but that didn't stop every surface in the forest from dripping water. As I walked along, I idly flipped likely looking pieces of bark or rocks on the side of the trail, hoping for a salamander encounter. And I found one! A Western Redback Salamander ( Plethodon vehiculum ) who was chilling in the damp moss under some bark.

That was my only amphibian of the day, but while hiking out, I was surprised to see a Common Garter Snake ( Thamnophis sirtalis ) just hanging out next to the trail. I really loved the red speckling down the sides

After a full evening, and morning, of heavy rain, the sun made an appearance so I hopped on my bicycle and went down to one of the local parks. It contains a stormwater wetland, which is an artificial wetland created by the city to treat the city's stormwater via natural bio-filtration before it is discharged into the local river. I like to wander through it, especially after heavy rains. I wasn't too hopeful for any amphibian sightings, though, considering it's all untreated, raw stormwater pouring in. I was wrong!

I was only there about 5 minutes when I flipped a beaver-chewed piece of log and uncovered a Long-Toed Salamander! ( Ambystoma macrodactylum) Right next to the first section of water, where it's the least treated. Apparently, the city's stormwater isn't as disgusting as I assumed. I also heard frogs the entire time I was wandering around, but, alas, did not actually see any of them.

I was out doing a work party today in a county park, digging some drainage channels on our first dry day after 3 solid days of rain. While walking to our work site, I decided to flip some nice logs beside the trail to see what was under them. I flipped a log, and saw something move underneath. I paused, seeing something that might be a stick, but almost might be a salamander tail. Then, it moved! A salamander!

Scooping up a handful of dirt, salamander included, I gave the animal a quick rinse and discovered that I had an Ensatina Salamander! ( Ensatina eschscholtzii) A delightful little find, I took the time to get some nice pics before letting it retreat back under its log.

In sharing my salamander tail with my fellow trail workers, I discovered that almost everyone seems to have a "Biggest salamander I ever saw!" story, presumably involving one of the Pacific Giant Salamanders around here. I have been promised pictures, and will post here if I get them.

Today, I was out in a county park helping put in a new stretch of trail. As we broke for lunch, the person working next to me yelled "Salamander!" and I rushed over to take a look. Sure enough, in the dirt in her worksite was a Long-toed Salamander (Ambystoma macrodatylum ) I gave the little guy a rinse and brought him out into the light, and quickly realized something odd. One of the salamander's eyes was dangling out of it's head! Over the eye socket was just a small scar, so apparently it is an older injury. The bad eye was just. hanging there. like a black marble stuck to the poor creature's head.

I briefly considered taking the salamander home, but it didn't seem to be acting oddly or bothered by the funky eye, and since it's healed up there's nothing I can do. So I instead carried him over to a nice rotten log a safe distance from our work site and wished him the best.

My other surprise of the day was an impressively enormous Pacific Sideband Snail. ( Monadenia fidelis ) Never seen one so big!

As I talk with other people who do trail work in the area, I hear more and more "The biggest salamander I ever saw!" stories. Fortunately, one of those people took photos and shared them with me. These pictures come from someone who works with the Forest Service around Washington, and on a top clearing fallen trees from a hiking trail, she encountered this large amphibian specimen. From the pictures, I believe it is a Pacific Giant Salamander (Dicamptodon tenebrosus) Apologies for the quality, they were apparently taken with a flip phone camera.

I have my own "biggest salamander I ever saw!" story, but alas, I did not have a camera with me that day. I was helping remove a rotten bridge over a stream, and when I stepped into the stream to hook up one of the large logs to be winched out, something moved at my foot. It was a large salamander, around a foot long nose to tail-tip, and a pale, almost fleshy color. We tried to catch it, but kicked up too much silt in the stream and the creature vanished. (At that point, we broke for lunch in the hopes the salamander would evacuate our work area and indeed, we did not see it again.) I hope to go back up that hiking trail some time to see if I can find it again.

After a winter of not seeing a single herp, spring is here and with it, my first sal of 2021. On a rainy day, I took a 13 mile hike around one of the local (very large) city parks. On a very muddy trail, I found this lil' Ensantina. 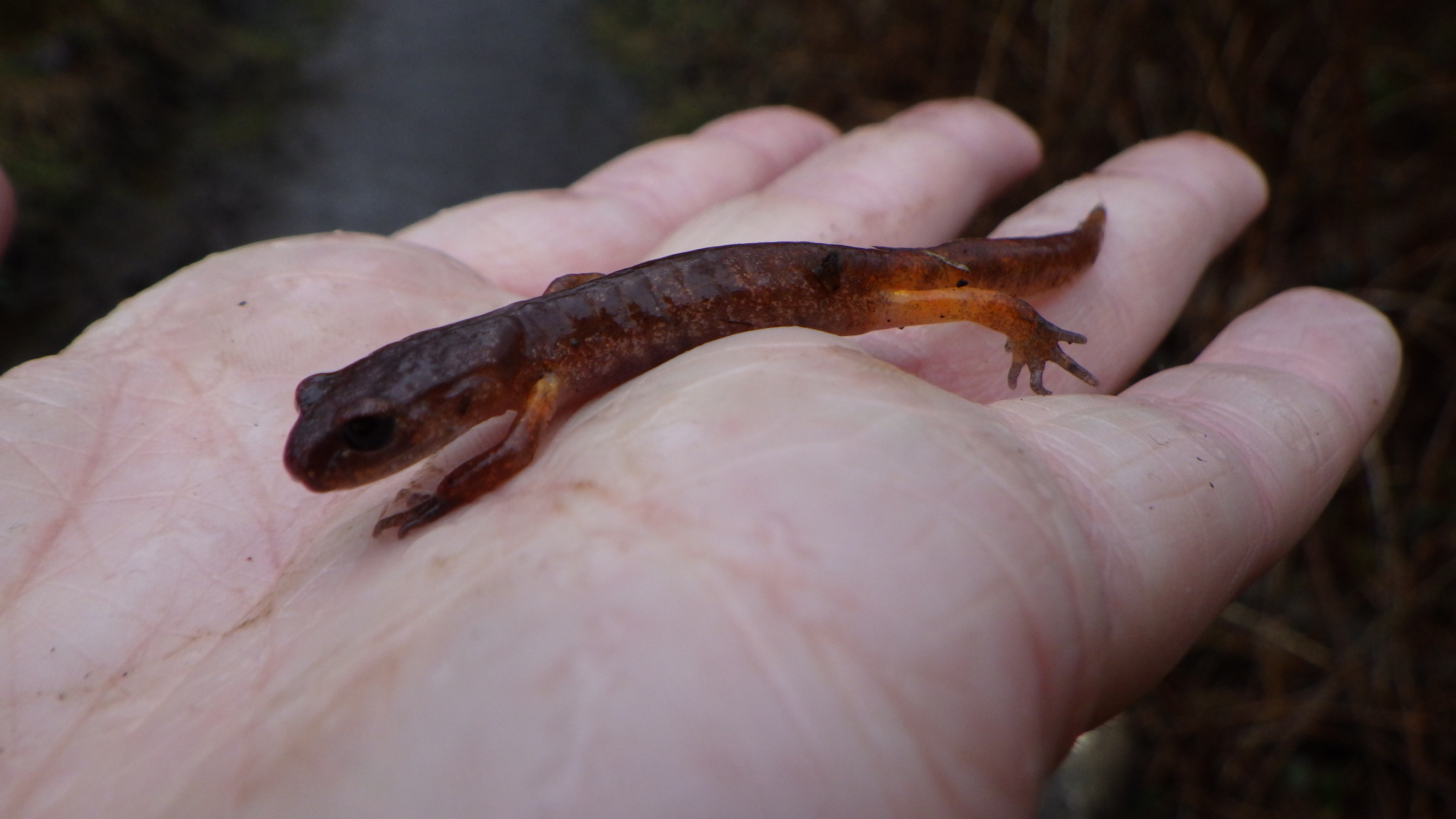 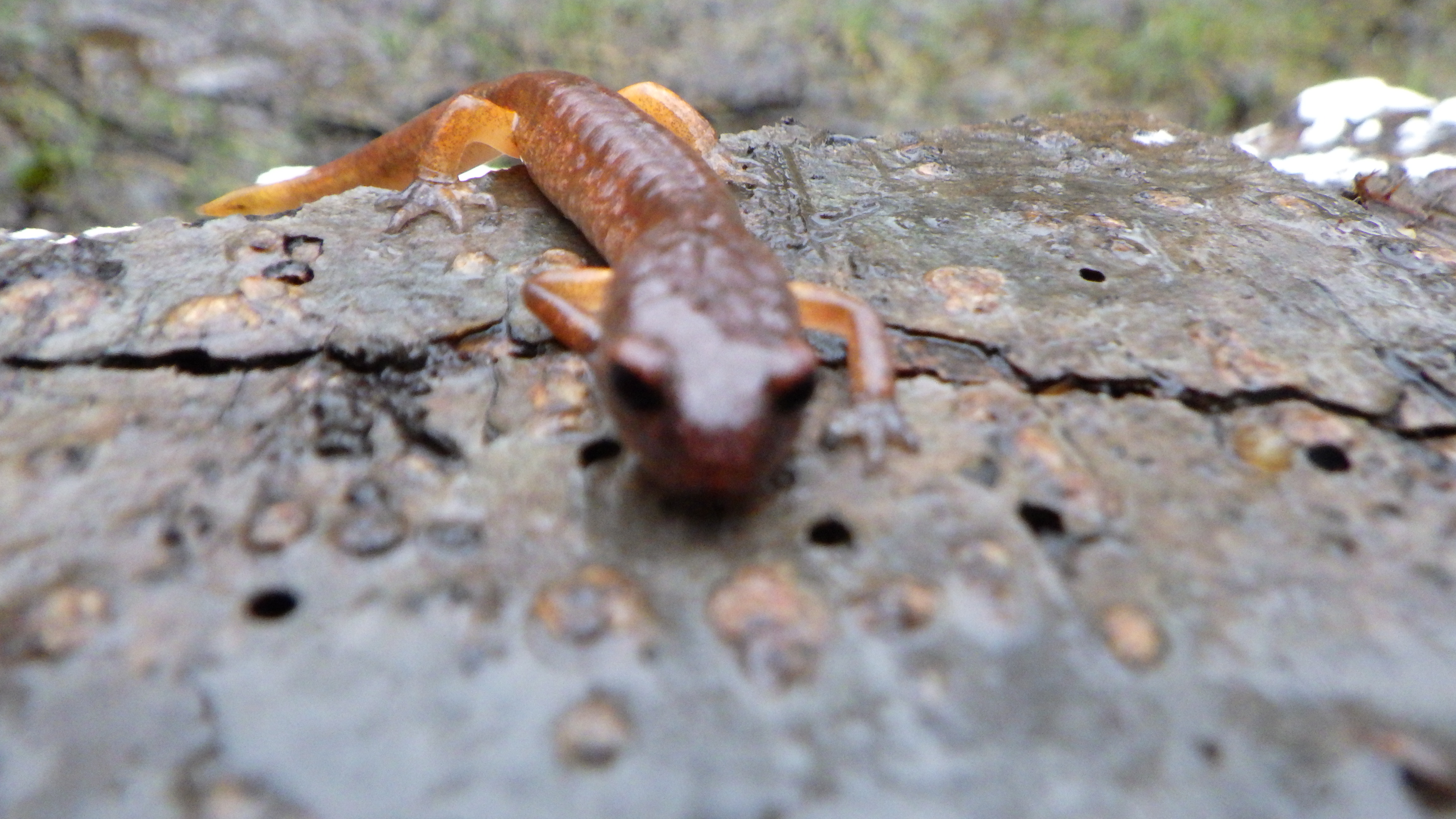 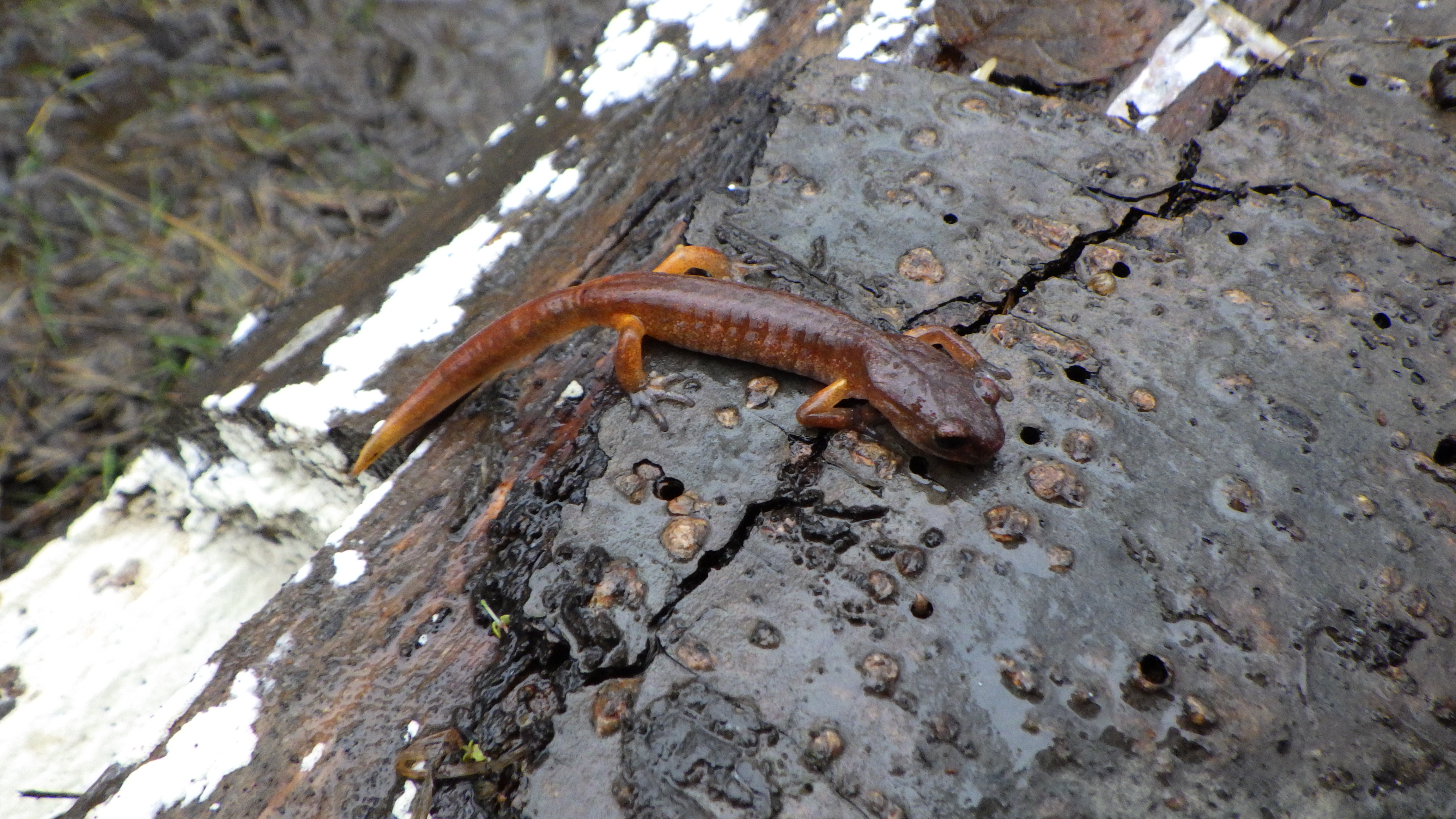 This is real cool!

Went for a nice, rainy (and sometimes hail-y) Hike in the woods and found two Sals.

Yet another Ensantina. I think a gravid female? It looks like eggs inside the belly, at least. 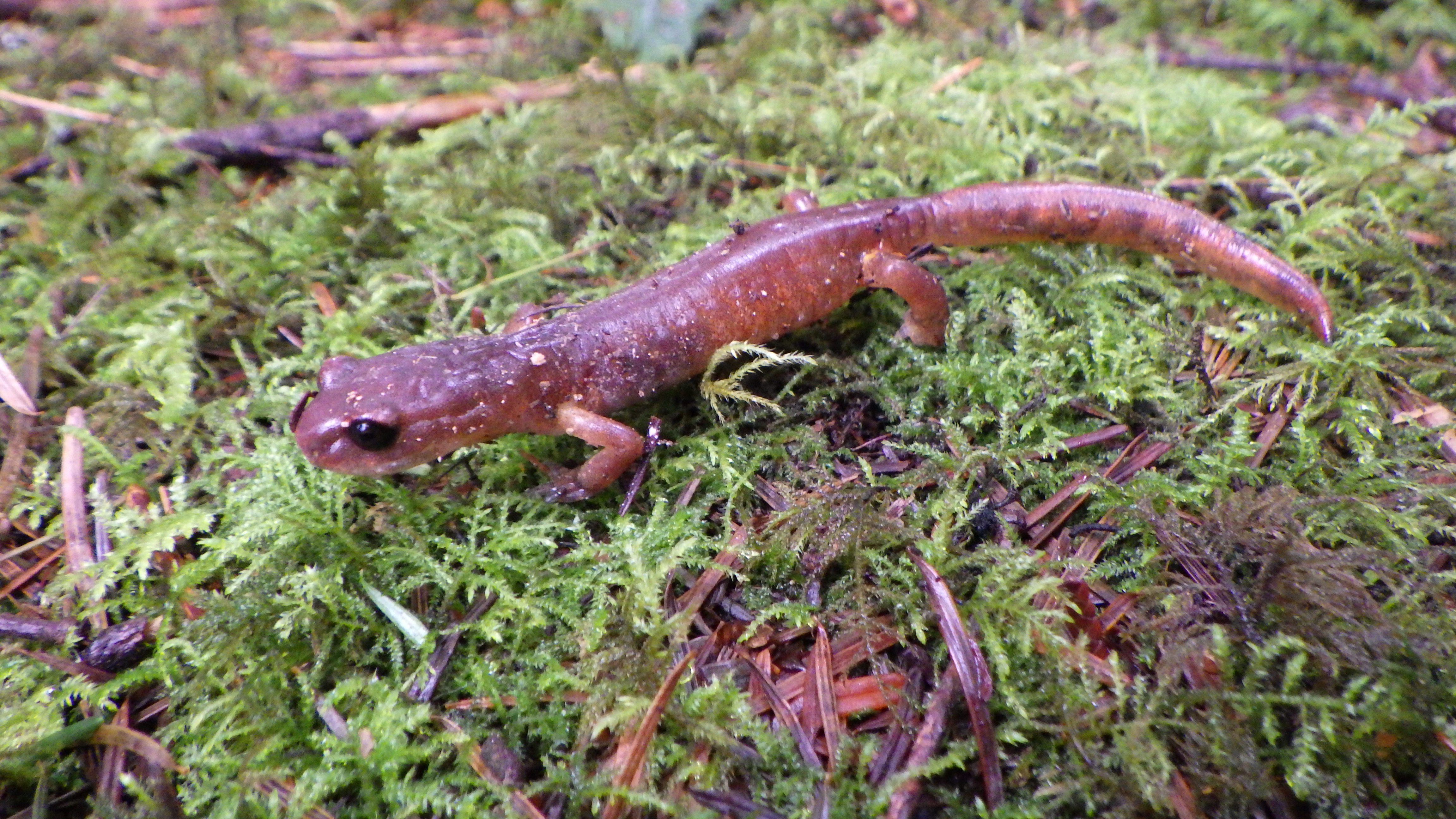 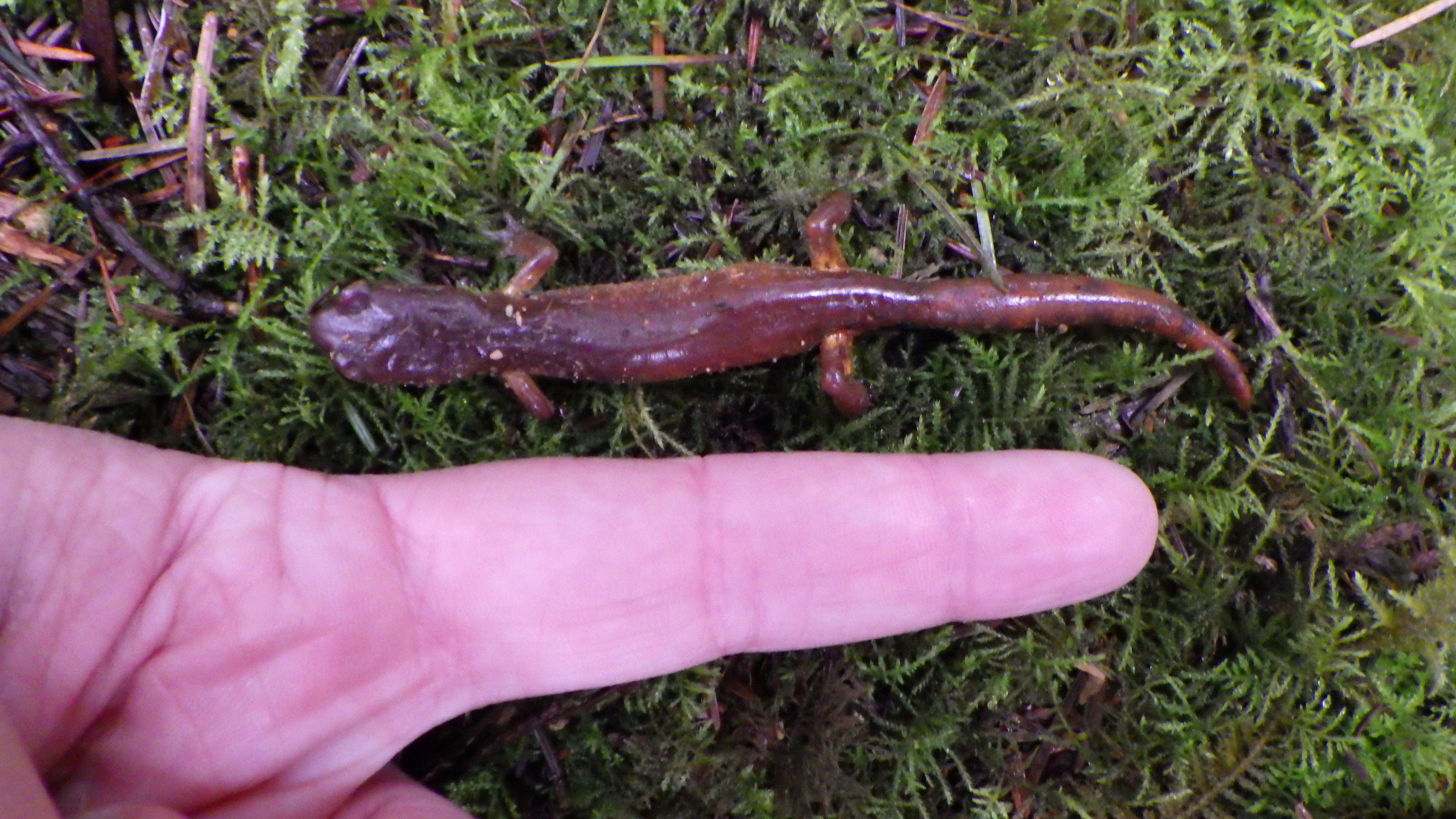 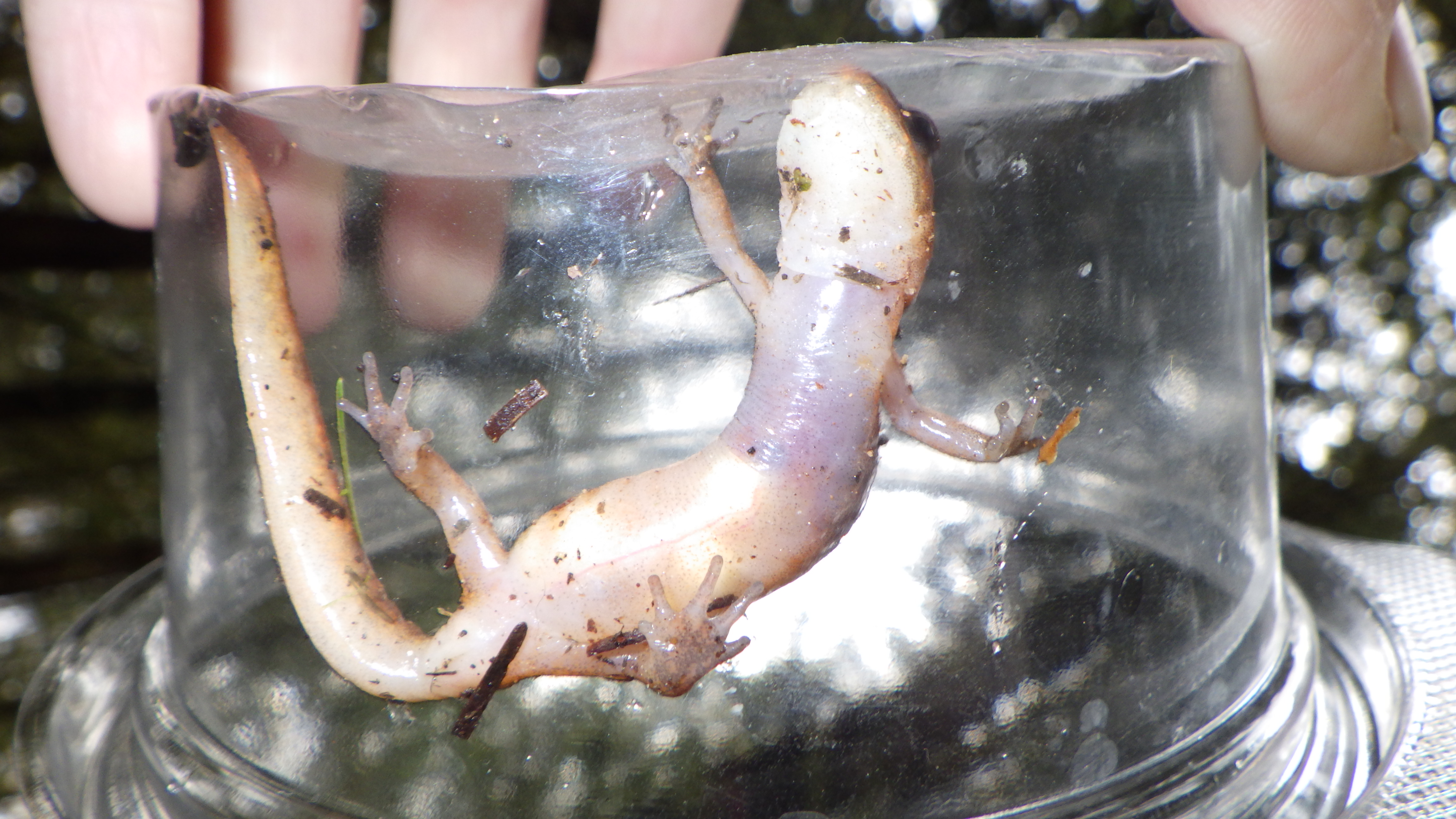 And a little Western Redback Salamander. 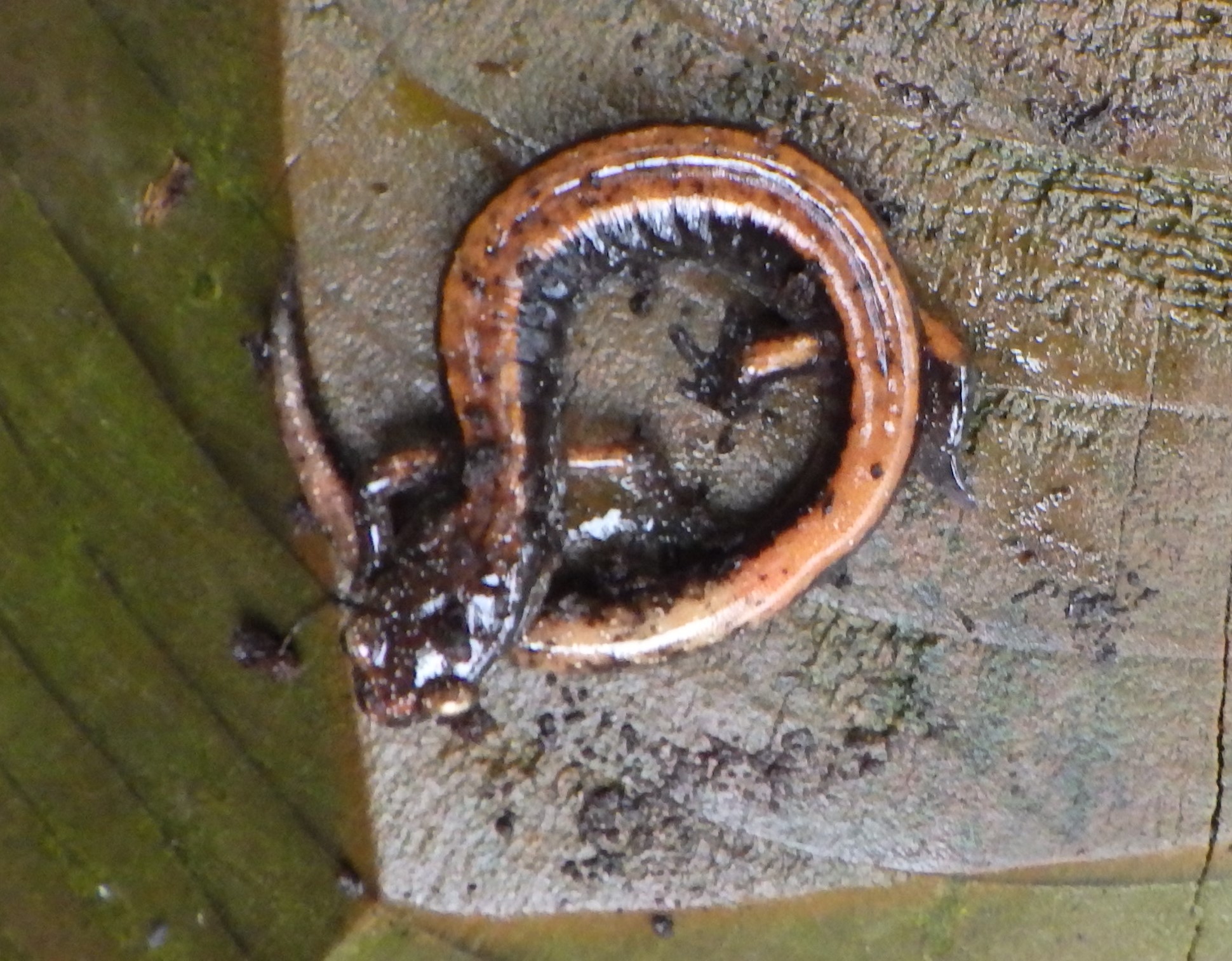 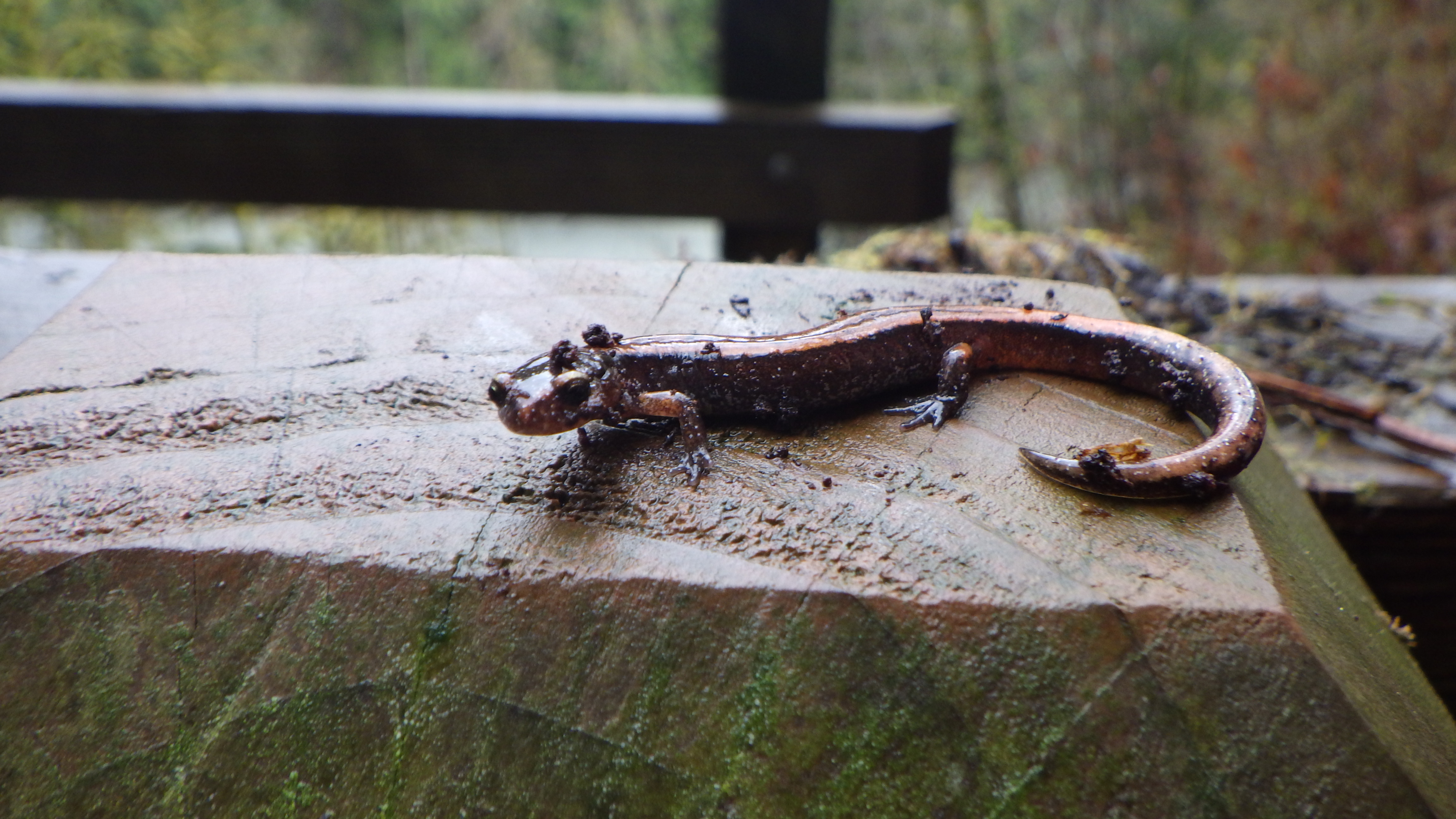 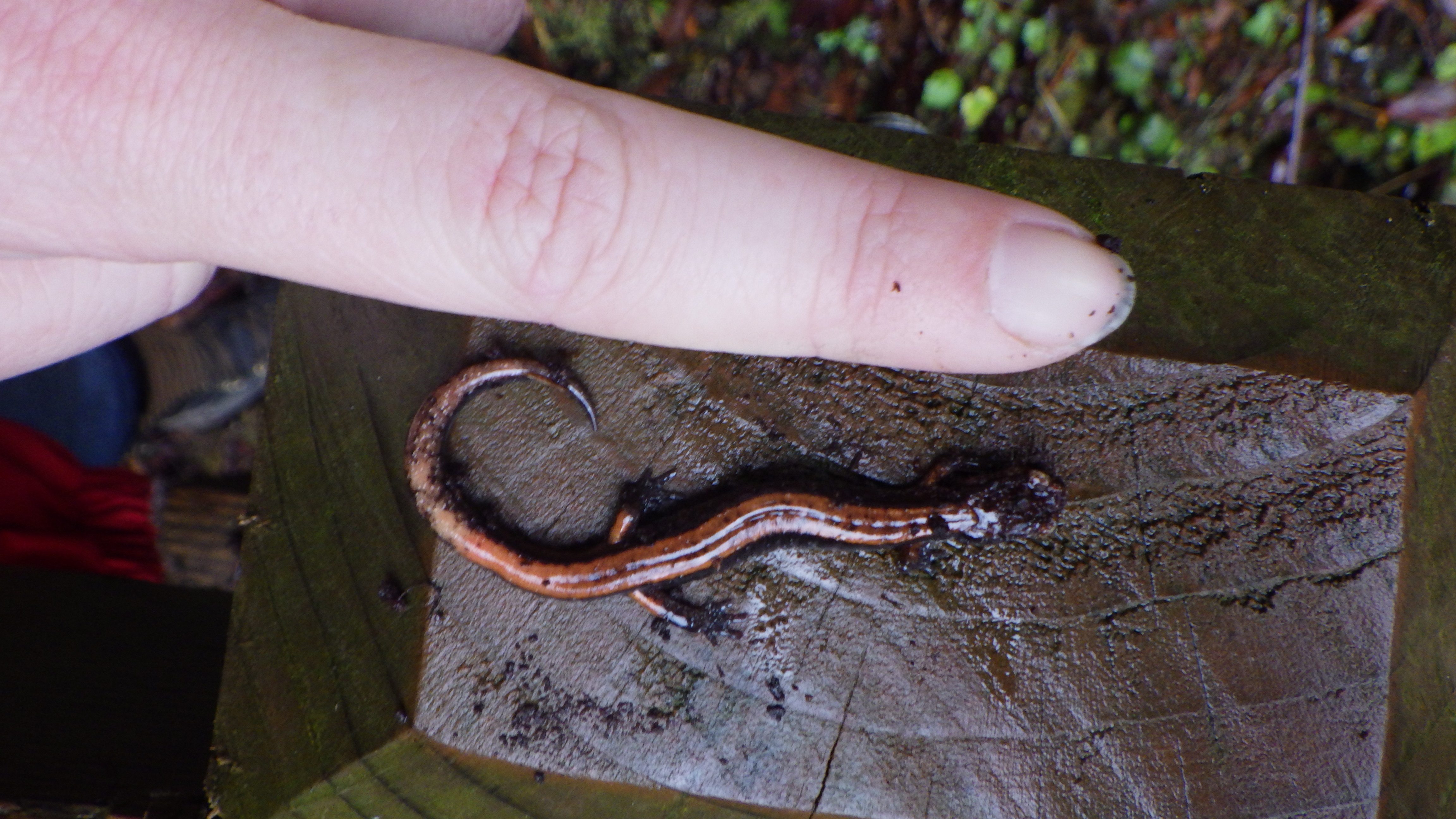 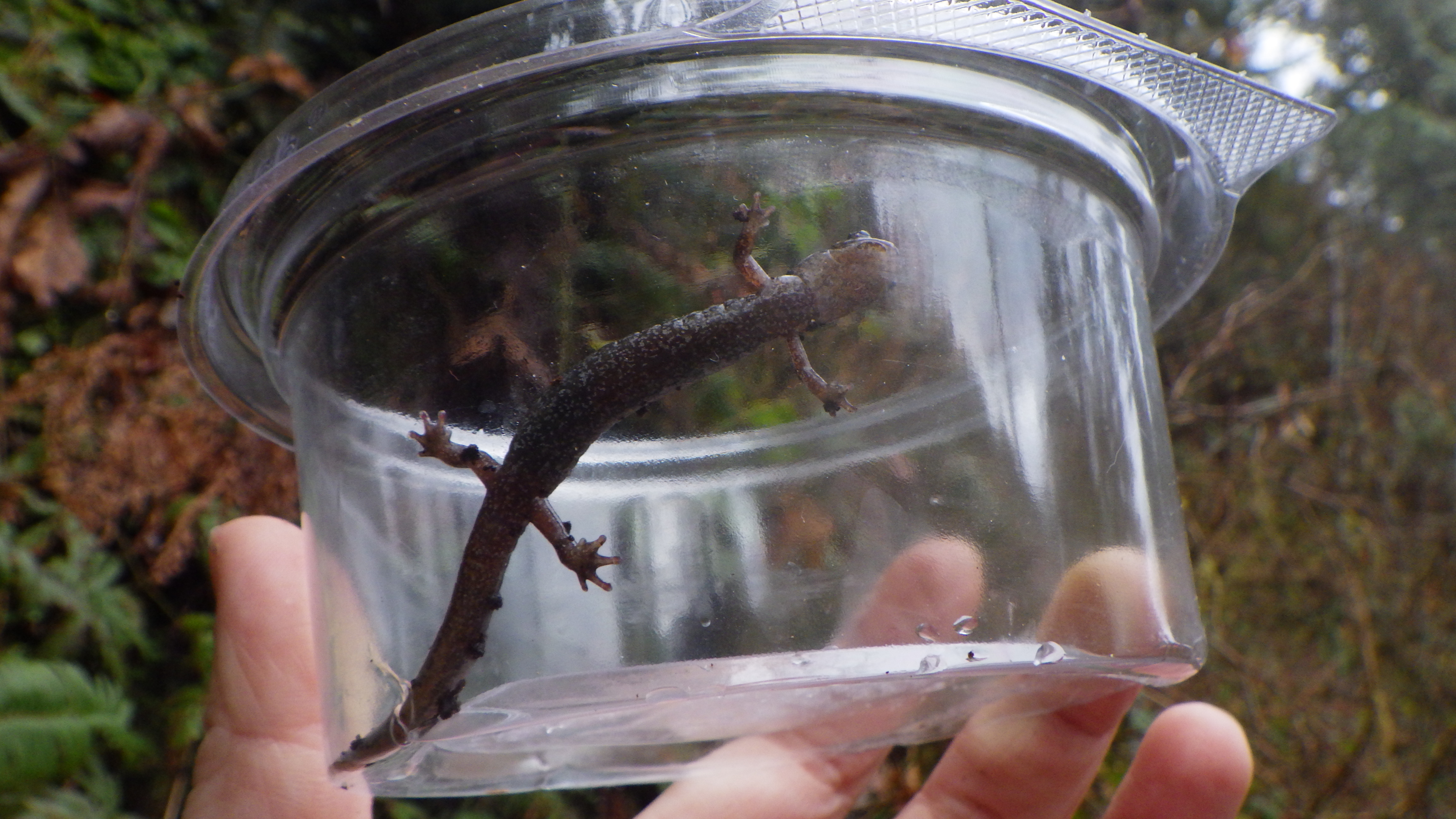