I'm pretty proud of it. Theres a lot of hiding space behind the plants and rock plus the pots. The mesh will come off that wood at the bottom, I'm attaching java moss to it. I superglued it to a rock but it still floats! Now to add my 2 axolotls

So many unreal set ups....giving me ideas for my tank to have a change
S

They aren’t too filled up and decorated yet but still little happy homes! My male is in the smaller tank and my 2 females are in the bigger one. But everyone is happy 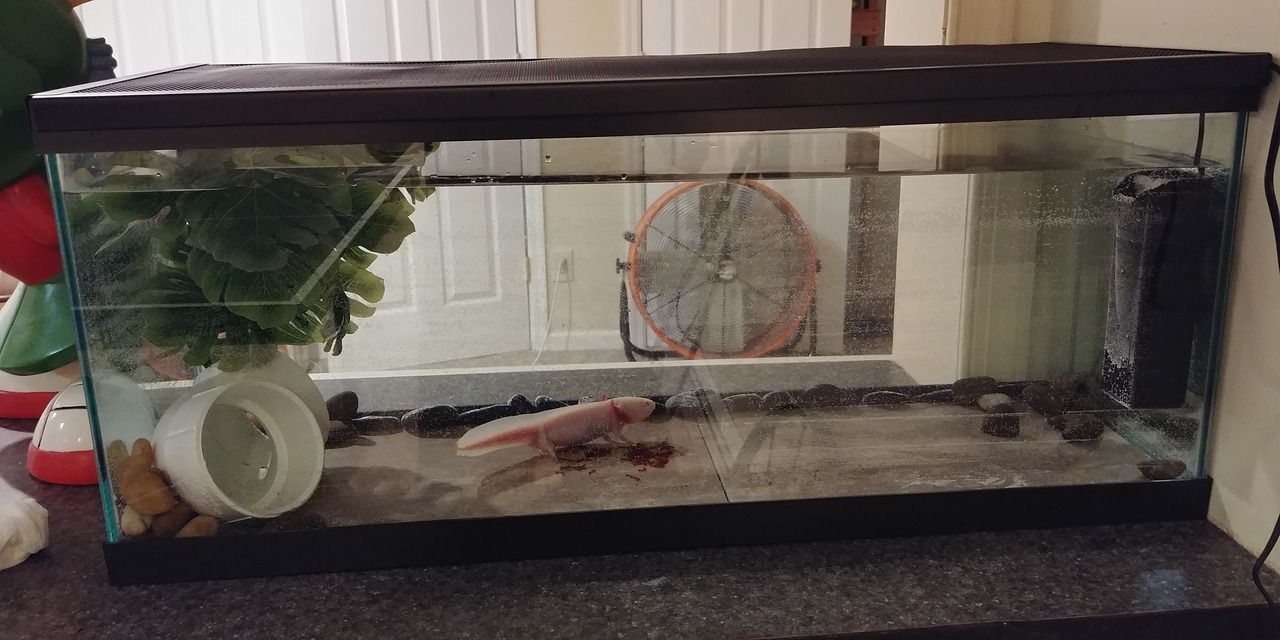 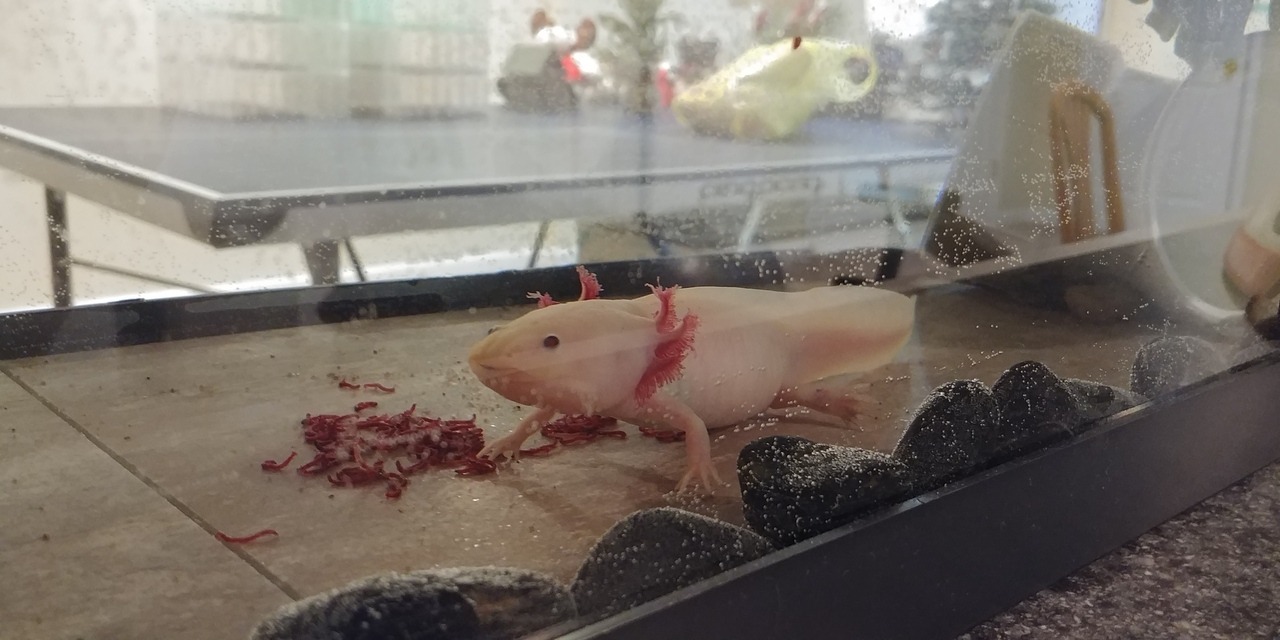 I'm pretty new to all of this, so my set-up isn't especially flashy, but here's my tank set-up for Boogs. We just transferred him tonight from a much smaller tank, and I think he's enjoying the extra leg room quite a bit. I'm hoping to add live plants at some point in the future -- he used to have a nice java moss (I think?) floating about, but the room we kept him in the past few months killed it due to light deprivation. We moved his new tank to a room that gets some ambient light, so I'm hoping that will give the tank enough intermittent light that something simple like a moss ball or a java moss will be at home among his decor.
Right now I'm looking into some terracotta hides on Amazon that may suit the naturalistic theme and give him some place to crawl into. I might just get a terracotta planter and stick it in there like I'm seeing some other people in the thread do. I guess I'll see what works!
Excited to be here! :ufo:
E

I can't tell, what is the substrate you are using? Your tank looks fantastic
A

This is my axie tank. I will be getting one lucy or melanoid axolotl as soon as the worm farm population is established. I have a crested java fern in the back, anubias nana on the fake driftwood and java moss on a stick in the front. 20 gallon long. bubble stone and 40 gallon sponge filter. The picture should be there.

Here are a couple photos of my Axie's tank. its a 36 gallon bowfront tank. All live plants, natural slate, and carib-sea natural sand. Plus a hammock in the corner. They seem to love it. Lght is only on for photos and cleaning. Plus is has a dimmer cycle for the plants and feeding time.

I don't know why, but i can't edit my previous post, so there is
better working link where i have more pics of my aquarium:

Little guy's tank is finally complete (at least until Xmas when my daughter can buy him some fake plants ?). Slate/sand bottom, turtle cave, hornwort, marimo Moss balls, various stones. I think it looks like a pretty suitable home for a mini dragon! He's in the far left above his cave BTW ?


Long time reader of the forum, first time poster. My four now not-so-little ones have been growing up together in the attached 120L, ready to be separated at maturity (they are 11 months old): unfortunately nature got in before I did and now there's a profusion of eggs added to the intentional decor!


Crowley is bottom left, Aziraphale peeking out of the plants and Quetzalcoatl far right. Atsi was hiding behind the Eheim at time of photographing.


The floating plants have been much more prevalent and were covering the surface of the tank, providing plenty of shade: there's been a die-back recently (possibly slightly cooler water temperatures of the winter months) but I'm on it. There is also a second tank about to come out of storage so I can separate the males and females!

This is Phoenix Axolotl's home


The aquarium is a 20 gallon long with Hugo Kamishi aquarium sand, a large drainpipe, large stones and Exo-Terra Silk Ficus hanging down from the rim on the back and sides. Filtration is a double sponge filter and a hybrid UV airstone. The UV is on from 0500 to 1700 only.


I use bottled water since my tap water is awful, water changes bi-weekly of 50% and poop-scooping twice or three times a day depending on how messy the cheeky little monkey is

I don't know how you people all make such nice pictures of your tanks!
I've given it a try, though:

There's currently four axolotls in here; one leucistic, one melanoid, two golden. It's a father and his three sons.

It's a bit of a mess, currently, but I like it.
I set it up in December, and I haven't done any maintenance since (not even water changes) - the waterweed has grown quite wild and there is some algae on the bottom part of the glass, but in general I'm really happy with how healthy and clean it still is.
I'm trying to find the perfect balance where I don't have to do any maintenance whatsoever, and this one is getting close!

Some technical information, for those who are interested:
- The tank is a Trofis Colisa 1200. Holds about 350 liters.
- Filter is a JBL CristalProfi e902 Greenline. It's opened for about one third of its capacity, and that is plenty.
- Lighting is one 39 Watt T5, which is on 10 hours a day. That seems enough to keep the plants alive, and the algae only grows at the very bottom of the tank (not sure why; maybe because the snails have a harder time getting there?)

For plants, I have:
- Waterweed (Elodia) in a garbled mess at the back. The axolotls regularly try to eat it, but it grows just as fast as they can destroy it.
- Java fern and Anubias glued to the hardscape. Due to the temperature, they only grow very slowly, but they're doing quite well.
- Java moss at the background. Four months hasn't been enough to get it to spread very much, but it's going steady.
- Some old vallisnaria. These too are harassed by the axolotls, but indestructible as always.

The wood is beech, from the local forest.
As substrate, a thick layer of sand (5 cm at the front, about 10 cm at the back) and all kinds of rocks. I'm not sure what kind of rocks. I gathered them out in the wild (and cleaned, boiled, quarantined them).

There used to be a very simple air stone in here, but it broke down. I'll buy a new one eventually, because the axolotls really liked hanging around in the bubbles.
Last edited: Sep 7, 2020

This is my set up so far. I have five species of live plants - the ones in the back are tall grasses and other tall plants that will hopefully provide lots of hiding places. Bright lights for photo purpose only. I will keep the dimmer lights on for the Axolotls. I have plant substrate underneath larger river stones so they don’t accidentally ingest them. 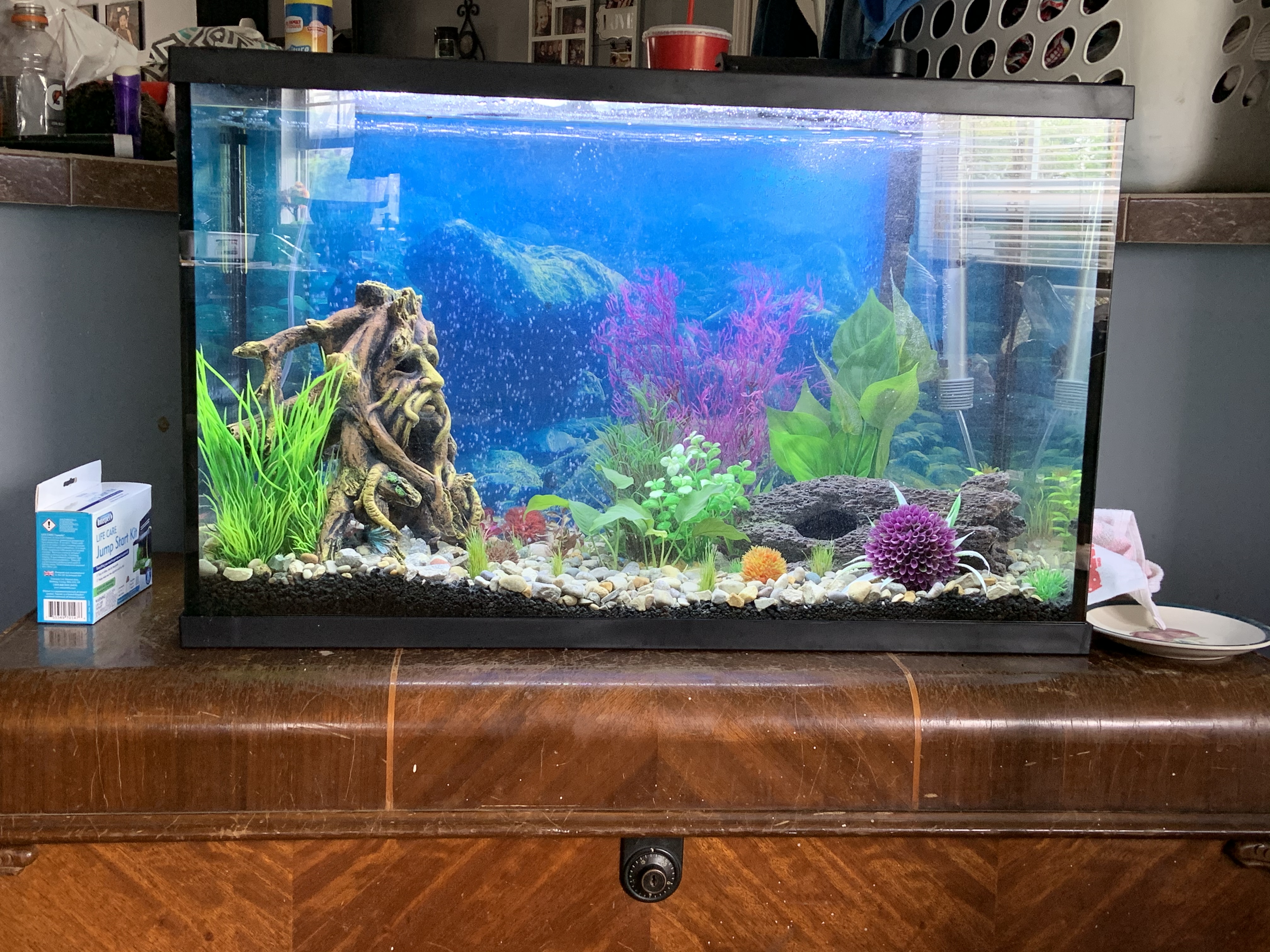 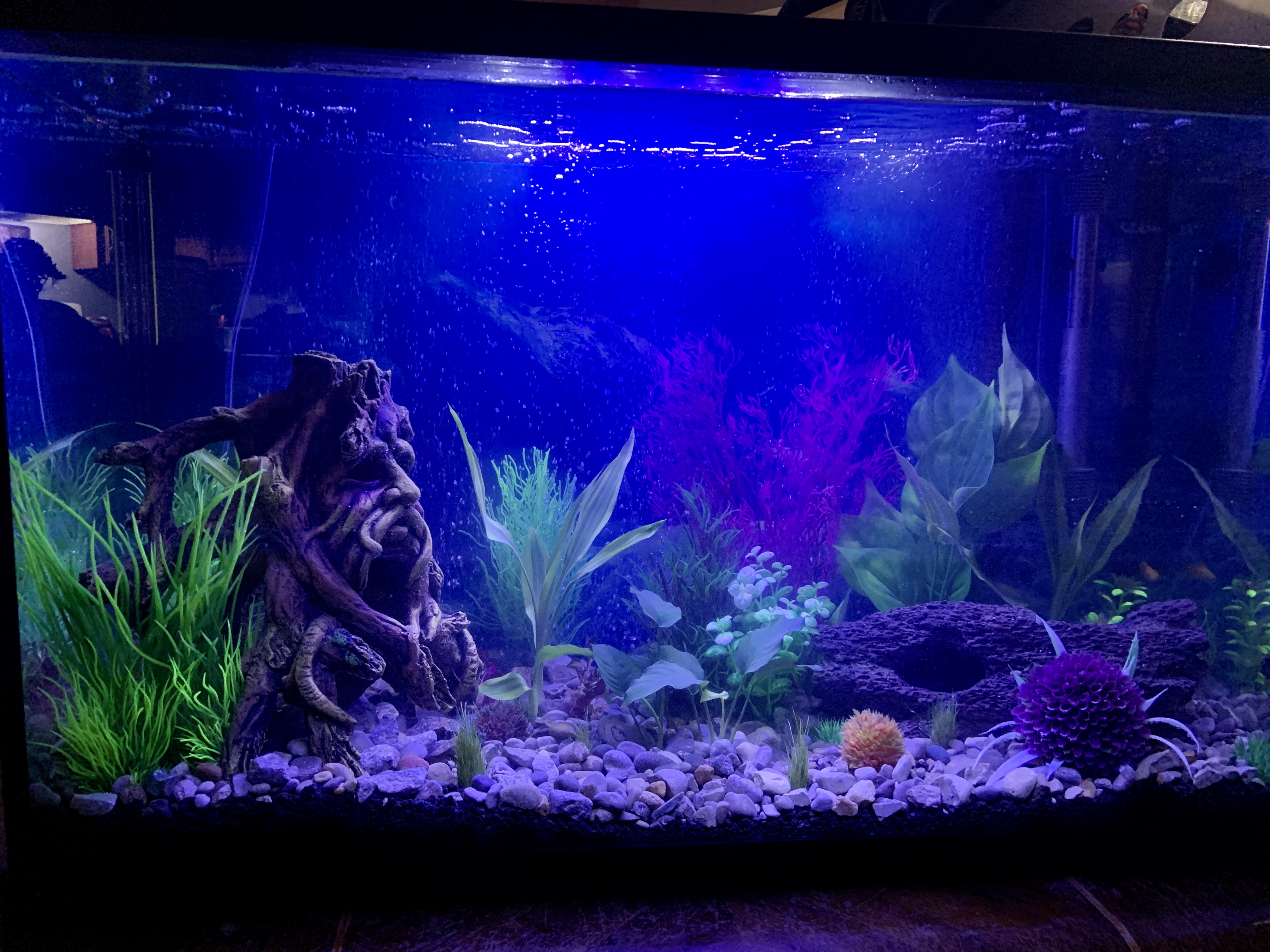 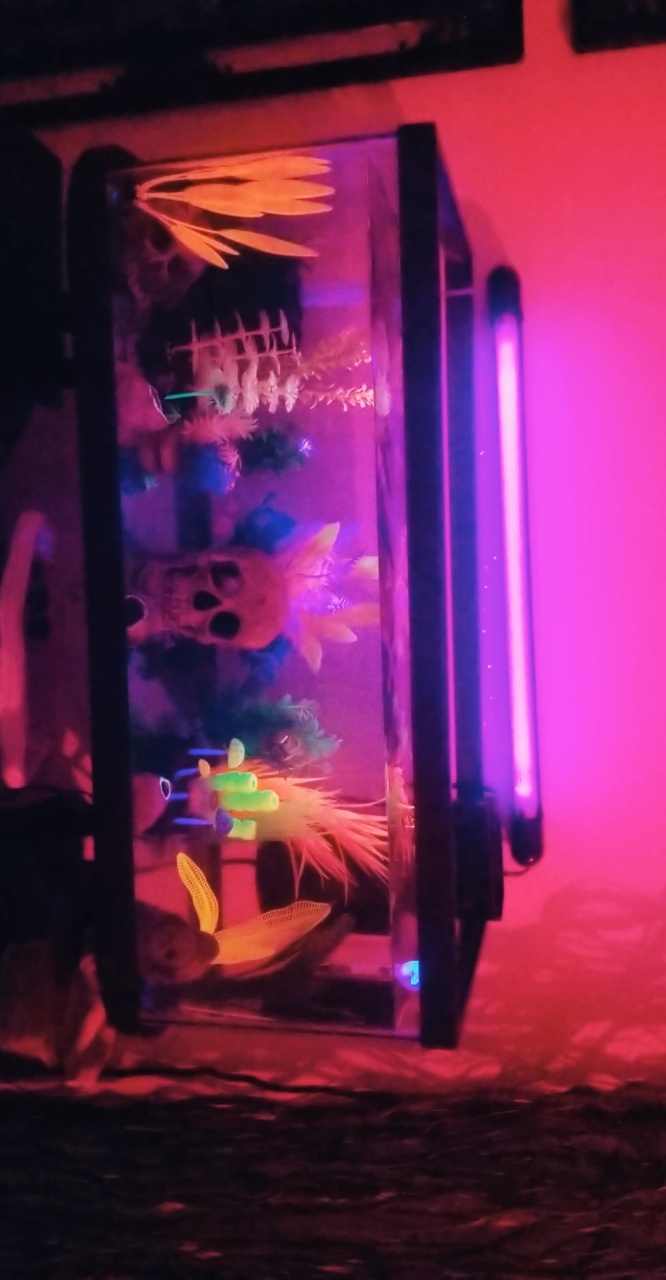